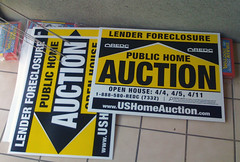 Virginia Republican'ts can't seem to decide, are they more the theocratic/Dominionist party of Pat Robertson and Jerry Falwell (e.g., "personhood," "trans-vaginal ultrasounds," closing down abortion clinics), or are they a bunch of corporate tools serving the top 0.1% (see Sen. Chap Petersen's press release below for information on what they're trying to accomplish on that front)? At least for now, though, they're trying their very best to be both at once. What a party!

Today, the House of Delegates Civil Law Subcommittee recommended 4-3 to "table" Senator Petersen's bill (SB 163) to protect Virginia homeowners from the use of fraudulent documents in a foreclosure.  The recommendation thus prevents the bill from being heard (and voted upon) by the full House of Delegates Courts committee in 2012.

SB 163, which created a civil cause of action for homeowners against banks which used a forged document to obtain a foreclosure, enjoyed a range of political support that spanned the political spectrum.