lowkell - May 16, 2018 6
by Lowell Here are a few national and Virginia news headlines, political and otherwise, for Wednesday, May 16. North Korea expands threat to cancel Trump-Kim... 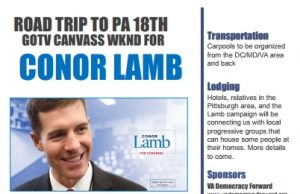 McDonnell: Our Decider is a Hider

Governor McDonnell's desperate rant at the UVA BoV, treating the members like a group of misbehaving children, will further erode his leadership image. While he partied in Park City and San Diego, the situation further soured. Same lack of character shown by Pennsylvania's Republican Governor Corbett in the Sandusky investigation.

Bob McDonnell has consistently demonstrated that he is all show and no go. Always at the ready to take credit for anything that plays well with his constituency, he chides responsibility when a misstep challenges the façade of success. This time, though, the Texas two-step isn't serving him well. He has drawn unwanted attention.

Take his running job creation and trade mission storylines. Neither of these campaigns was designed to lift the Virginia economy. Both were empty vessels floated to buoy his resume. If perchance employment grew and/or foreign investment occurred, he could always claim credit via post hoc ergo proctor hoc attribution. Hey, don't let credit go wasted. Democrats in Virginia aren't having any of it.

But in the cases like his failed attempt to privatize the Alcohol Beverage Control (ABC) stores, his big lies about righting the Virginia Retirement System while robbing the trust to "balance the budget," and handouts to indigents like Dan Snyder and Donald Trump, all things he can't deny he owns, he's left a trail of deceptions whose accumulation along with his well-documented reactionary pronouncements on social issues, have derailed his ambitions. He may end up the lamest of lame ducks.

McDonnell and the Sandusky Trap

For six long years as Pennsylvania Attorney General, Tom Corbett allowed the Sandusky investigation to languish. Maybe that is why the Second Mile foundation board members contributed $25,000 to his gubernatorial campaign a year after Corbett had impaneled a grand jury to look into allegations. Pay to play.

That Governor, who, as will be addressed separately, is susceptible the same kind of illusions as our own Bob McDonnell, was unwilling to distance himself from any association with Sandusky or Penn State even when any competent prosecutor would have had been well beyond alarm. When Corbett became AG, the allegations had been percolating for a good while. So the failure to pursue an investigation does not fall squarely on him alone. But...Corbett was in office for six years while Sandusky's abuse continued.

Penn State is a behemoth institution with the kind of influence that reaches into every corner of the state and beyond. Political success in Pennsylvania includes being on board with that reality. It is easier to bask in the halo's glow than to chance a shadow on your own ambitions.  It's a common human weakness; authority allows it to blossom and in this case Corbett and Sandusky and Penn State were all seduced by it. That partially explains why our own Governor has moon-walked away from the crisis at UVA. McDonnell thinks he has fashioned a position where he can claim decisive action and stay on the good side of everyone including disgraced political allies like now former Vice-Rector Mark Kington.