The Calls for Northam to Resign Suffice to Prove He Should...

Andy Schmookler - February 3, 2019 4
I want to confess -- and I mean that sincerely -- that I have difficulty assessing what disclosures warrant someone resigning from elective office. ... 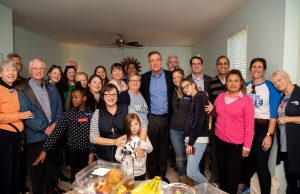 Andy Schmookler - April 29, 2017 9
Dear Senator Warner, A great many Americans were heartened – one might say, relieved – when you and Senator Burr stood before the press together,...

Evolution on the issue of same-sex marriage doesn’t make up for...

While some of Virginia's elected officials have 'evolved' their thinking on same-sex marriage, the same cannot be said about the dangers posed by construction projects like the Keystone XL Pipeline, a project that has become the ultimate symbol of the Northern Hemisphere's rush to exploit any and all forms of energy, regardless of the short or long-term consequences.

"It wasn't his telling the TV reporters, "I'm very concerned about climate change" that disturbed me, but rather his citing the State Department's recently issued Environmental Impact Statement (EIS) as evidence that Keystone would have no major environmental impact. Didn't he know it has been revealed that the EIS had been prepared by individuals with close ties to TransCanada, the company pushing to build the pipeline?"

Obama Rallies the Grassroots in Roanoke

Today, Sen. Mark Warner and Gov. Tim Kaine joined President Barack Obama for a Grassroots Rally in Roanoke at the historic Firehouse 1. An overflow crowd of more than 2,000 filled the street to hear the President give a speech filled with optimism for the future combined with a promise to work throughout a second term to regain for the middle class the American dream that seemed to vanish during the Bush years.

The President reminded us that the change we hoped for four years ago hasn't been as fast as we wanted or as complete as we hoped for, but if we remain true to the vision that the way to grow the economy is not from the top down, but from the middle out and the bottom up, all the nation can prosper once again, not just the top 2% of Americans.

President Obama remarked that in 2008 when he visited Roanoke, political pundits said he was not serious in the visit but just covering all bases, However, he stated he intends to show the pundits again that, "I'm going to get some votes down here." He also promised us that if he wins Virginia, "I'm going to get four more years." He's absolutely correct.