Wassup with Dave Brat & debating: is it tiny hands...

Ailurophile - October 22, 2016 0
Dave Brat does not appear to have the bal...well let's just say the manly spirit to face up to his opponent Eileen Bedell in...

Ailurophile - October 21, 2016 3
CORRECTION:  This article originally and incorrectly stated that the Southern Poverty Law Center was investigating Dave Brat for his white nationalist ties.  They have...

Dave Brat is in the Wurst Pickle

Ailurophile - October 12, 2016 4
The near-silence of Donald Trump supporter Rep. Dave Brat (VA-7) on this week's fiascos in the GOP is telling.  Brat is famous for having... 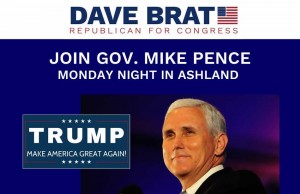 Res ipsa loquitur – the matter speaks for itself

AnonymousIsAWoman - March 17, 2016 12
Note: The following post grew out of an email conversation I had with Lowell. We were messaging back and forth about a post on...

lowkell - February 19, 2016 2
As the global climate crisis spirals out of control, the Virginia Tea Party Federation is busy...no, not advocating free market solutions to the crisis,...

Turns out they were right. There is a self-anointed death panel and it meets in this building. Recall they said that healthcare would be rationed? Now that they've managed it, they are quite proud of their accomplishment. What Republicans really relish is the surreptitious method: don't decide, just deny.

Millions and millions and millions of your federal tax dollars have been flushed down the Potomac only to be harvested by wiser state legislatures. What could have been a catalyst for not only broad medical service sector growth but also the survival of rural medical clinics and hospitals was set aside for base political posturing. This should have been a simple financial decision. Instead it was a cynical sacrifice of their voiceless, powerless constituents for the protection of their own political hides.

Let's consider the costs because they are not limited to those dollars passed on to other states. Some number amounting to just under 5% of Virginians are without healthcare coverage because Medicaid expansion has been denied. That doesn't mean they go without healthcare. In many cases it means they go without healthcare until there is a crisis and then an emergency room visit and expensive procedure are required. Who pays for that? You can make up all kinds of voodoo financial and economic formulas but the costs get passed to those who are covered in increased insurance premiums and/or copays and/or deductibles. And maybe more importantly, in scarcer medical service resources. Visit an emergency room for the Republican version of healthcare delivery in the unregulated free market. They simply don't understand that the risk pool is the risk pool. No one in America is denied care in an emergency and those emergencies are exponentially more costly than preventive care. Republican denial of coverage poisons the well that feeds the pool. Welcome to the Teapublican Utopia.

On the other hand, some number amounting to just under 5% of Virginians now have healthcare insurance through the Federal Marketplace established by the Patient Protection and Affordable Care Act. That hasn't solved every problem but it goes a long way in that direction. While some are subsidized, these policies are not some government giveaway. They are a way Americans can take responsibility for their financial exposure. Republicans talk about individual responsibility in a vacuum. They like to preach about it but don't want to facilitate it. The fact is that 60% of bankruptcies in the United States involve medical indebtedness. Healthcare insurance builds a firewall between personal financial survival and insolvency leading to financial disaster.

Meet the New Boss, The Same as the Old Boss

I thought of Orwell as I listened to Dave Brat's latest speech celebrating his victory over House Majority Leader Eric Cantor - and announcing his choice of Cantor's former political director to be his new campaign manager.  Well, that revolution didn't last long, did it?

The media, of course, has been full of commentary about the Tea Party "revolt" against the "Republican establishment".  But we've heard too few good explanations of what this "revolt" is really about.

If you were to search for the core of modern conservatism - the driving force and principle at the heart of it - you will find that it is not fundamentally driven by religion, by prejudice, by support for the military, by love of guns or rural values.  All of these perspectives are certainly important, particularly to the GOP grassroots.  But what drives this party - more than ever before - is the money, support and agenda of the most enormous corporations on Earth.  This is the party of the Koch Brothers, the party of ALEC, the party of Exxon-Mobil and Wall Street.