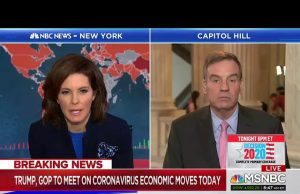 lowkell - March 10, 2020 0
See below for video and a transcript of Sen. Mark Warner, on MSNBC this morning, discussing what needs to be done regarding the coronavirus...

Are These the Kind of People Who Should Choose Our Future?

Bernie, It’s Not “the Billionaire Class” You Need to Defeat But...

Andy Schmookler - April 16, 2016 7
Dear Senator Sanders, You’ve done the nation a great service in calling attention to the way Big Money is rigging our politics and our economy. But...

KathyinBlacksburg - September 10, 2011 10
It's hard to know where to begin. There's the idiocy of Senator Mark Warner's failure to grasp economics 101. There's the outrage of blaming the people for the deficit. And then there's the litany of cliches he speaks. So, let's talk about each of these.

Economics 101
Mark Warner cannot even diagnose what went wrong and why we have a large deficit. A large portion of the deficit is the result of the recession (not the cause of it). The deficit is also the result of the very tax cuts Warner seems too willing to hand over.  And, it is the result of off-the-books wars (which Obama put back on the books to keep us honest). But this much is certain (and it seems to elude Warner every time): You cannot grow an economy while slashing jobs.  And that is precisely what Mark Warner's desire for massive and too-rapid deficit reduction will accomplish.  When the private sector isn't hiring (and there  are some pretty Machiavellian reasons for that), the government must be the employer of last resort. Tax cuts reduce revenue, which means government has fewer resources for job-growing.

When offshoring is too enticing, you must remove the incentives.  AND, when Wall Street becomes the Wild West, you must reasonably regulate or re-regulate.  You surely need to fix those underlying causes of the latest debacle.  Tax cuts won't help deficit reduction AT ALL.  They make it worse.  Reagonomics has FAILED.  The more-than-thirty-year experiment in trickle-down economics has shown clearly that you cannot tax-cut your way into job growth.  And savaging the poor, children, the old and the unemployed won't solve this, though it does serve as balm to Republicans.  (It is also unethical, but in DC these days, few seem to care about that.)  If nothing else, the latest economic debacle shows that Ayn Rand/Peter Peterson/Chicago School of Economics/Club for Growth ideas are bankrupt hypotheses for any economy.  Who would base their economic strategies on a 10th rate novelist anyway? But the Peter Peterson drones mumble on with their mouthfuls of economic mush...

(More on what Warner gets wrong below)

President Obama on Debt Ceiling: “If Not Now, When?”

A full transcript of President Obama's press conference on the debt ceiling is here, and an excerpt is below. The bottom line, though, is that Republicans are completely incapable of reaching an even semi-serious compromise, one in which both sides give something, because they are terrified of/controlled by the extremists in their party. That's why John Boehner, who had wanted to cut a big deal with President Obama, was forced to back down. It's also why the ambitious, cutthroat, unprincipled Eric Cantor is happy right now, as he sees a path to move up in rank. Meanwhile, the country's solvency, economy, prosperity, future all hang in the balance, while Republicans like Eric Cantor stick to their rigid, taxes-are-evil, my-way-or-the-highway approach. Wonderful, eh?

I will not sign a 30-day or a 60-day or a 90-day extension.  That is just not an acceptable approach.  And if we think it's going to be hard -- if we think it's hard now, imagine how these guys are going to be thinking six months from now in the middle of election season where they're all up.  It's not going to get easier.  It's going to get harder.  So we might as well do it now -- pull off the Band-Aid; eat our peas.  (Laughter.)  Now is the time to do it.  If not now, when?

We keep on talking about this stuff and we have these high-minded pronouncements about how we've got to get control of the deficit and how we owe it to our children and our grandchildren. Well, let's step up.  Let's do it.  I'm prepared to do it.  I'm prepared to take on significant heat from my party to get something done.  And I expect the other side should be willing to do the same thing -- if they mean what they say that this is important.

I believe that's known as "calling their bluff." So, now what happens?

But Is the Obama-GOP Tax Deal Good For the Country?

Teddy Goodson - December 10, 2010 5
We have had a couple of days to digest the details of the compromise tax agreement reached between the White House and the Republican leadership from the other end of Pennsylvania Avenue. Most of the discussion has sought to parse the agreement politically, in true Inside-the-Beltway fashion: did President Obama "get the best deal" possible; will it help his re-election campaign in 2012, especially among the (crucial yet fungible) independents; has he moved enough to the (mythical, movable) Center; has his leftist base completely lost faith in him; will the Republican members on the Hill vote for the deal, but so-called liberal Democrats not, and so on? What I want to know, however, is this: is the Obama-GOP Tax Deal good for the country?  I am not so sure, and that question has received remarkably little attention

It has turned cold in Washington, with the nighttime temperatures often below freezing.  I woke up around 3:30 due to my sinuses.  As I sit in my living room so as not to disturb my wife with sneezing and coughing, I listen to the sounds - a Mount Vernon clock on the wall ticking as its pendulum goes back and forth, a cat or two padding almost noiselessly across the floor and down the stairs, and the blower for the furnace as the heat kicks in.

It is that last sound that disturbs me.

I have heat -  and food - and roof over my head - and transportation - and the ability to pay our bills.

Those whose unemployment compensation has run out?  They may have difficulty paying their bills.  Soon they may not be able to afford to put gas in a car, or pay mortgage or rent.  Food will become scarcer.  And heat -  at some point, will their house remain silent because there is no money to pay for it?  My furnace is gas, but the fan is electric.  If I were in arrears on either bill, might we need to bundle up and pray the pipes don't freeze?  Might we be forced to live in car yet not be able to run the engine to stay warm?

We are near the nation's capital.  What if we were further north?

Still Looking for a Spine on Tax Cuts

In their Thursday morning meeting with President Obama, congressional Democrats wanted to know what the President's strategy was on the question of extending the so-called Bush tax cuts, according to Carrie Budhof Brown and Glenn Thrush, writing in Politico. Apparently Nancy Pelosi laid it on the line with the President, telling him that House Democrats insist on extending the tax cuts for the middle class, but definitely not for the wealthy, those making over $250,000.  Unfortunately, she apparently did not get a commitment from Obama, said Glenn Thrush in a later article in Politico, who noted it was "a move that could complicate the administration's efforts to reach a compromise with Republicans," especially since Senate Democrats did not believe they could get such a bill passed by the Senate, although they wanted to force a vote so as to put the monkey on the backs of the Republicans. Democrats on the Hill keep telling Obama that he cannot appear weak in negotiating with Republicans, and that his constant talking about driving "the hardest bargain---- while signaling his openness to a compromise" inevitably sounds weak to Republicans

Attention Gerry Connolly, and any other Democrat who thinks it's a smart idea to extend the Bush tax cuts for people making over $250,000 a year, even as the national debt piles up.

A majority of Americans favor letting the tax cuts enacted during the Bush administration expire for the wealthy. While 37% support keeping the tax cuts for all Americans, 44% want them extended only for those making less than $250,000 and 15% think they should expire for all taxpayers.

That's right, not only were the Bush tax cuts a horrible idea in the first place (which, in fairness, Connolly seems to acknowledge), and not only were they designed to expire at the end of 2010 (it was the Republicans, by the way, who designed the legislation that way), but only 37% of Americans want to "keep the tax cuts in place for all taxpayers." Is this a no-brainer or what?
12Page 1 of 2