It’s bad enough that GMU’s Mercatus Center is a Koch-sucking far-right-wing organization (e.g., see this New Yorker article, which discusses how “the Koch family foundations have contributed more than thirty million dollars to George Mason, much of which has gone to the Mercatus Center”).  But now….this??? Let me remind everyone that Antonin Scalia was a corrupt, bigoted extremist. Why would anyone in their (far) right mind want to name anything after that guy, let alone a law school? Has GMU gone completely off its rocker or what? Or, as ThinkProgress Justice Editor Ian Millhiser puts it, GMU can now “stop pretending to be anything other than a conservative policy shop with students.” Ugh. I mean, what’s GMU going to do next, the Trump School for Ethics and Tolerance?

P.S. Of course, GMU’s Board of Visitors is an overwhelmingly right-wing outfit, filled with appointees by Bob McDonnell and donating at a nearly 50;1 ratio to Republicans over Democrats. This, apparently, is the result. 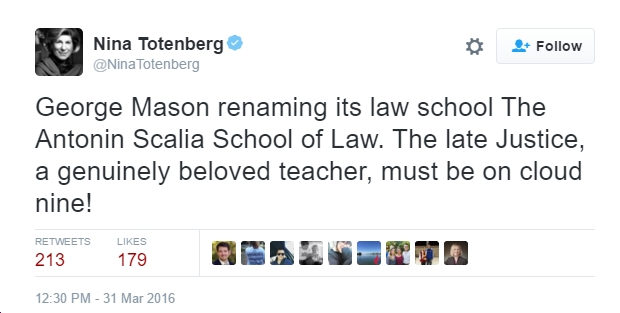 Glenn Youngkin’s WaPo Op-Ed Getting Eviscerated in the Comments Section (e.g., “You are spreading anti-science to a loud, uninformed minority”)

Audio: On Lou Dobbs’ Podcast This Morning, Donald Trump Said Glenn Youngkin Wrote Him a “Beautiful Letter”; Says Youngkin Would NOT Have Won Without Him https://bluevirginia.us/2022/01/audio-on-lou-dobbs-podcast-this-morning-donald-trump-said-youngkin-wrote-him-a-beautiful-letter-says-youngkin-would-not-have-won-without-him