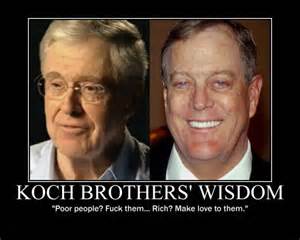 In many ways, George Mason University (GMU) is a fine school, an institution of higher learning that Virginians should be proud of. But in at least one way, it is a cringe-inducing embarrassment. That, of course, is the tremendous amount of money from the Koch brothers that goes to fund climate science denialism, to rail against environmental regulation more broadly, at GMU’s far-right-wingnut Mercatus Center, described in The New Yorker as essentially a scam to “take corporate money and give it to a neutral-sounding think tank.” Mercatus is very useful to the Koch brothers, of course, because they can count on the corporate/clueless media to cite it as some sort of unbiased, neutral “think tank,” when in reality it is wildly biased, and certainly not a “think tank” the way most people would ever “think” of that concept.

Given all this, it’s not surprising that Koch-funded fellows at Mercatus have now produced a laughable, far-right-wingnut report that purports to measure “Freedom in the 50 States.” Of course, it does no such thing, unless by “freedom” you mean “freedom for corporations, polluters, and the super rich to completely run amok, while the state tells you what you can and can’t do with your body, who you can or can’t marry, whether or not you can organize with other workers to demand better pay and benefits, etc.”  In short, this report is a Koch-brothers-meet-John-Galt wet dream of what America should look like. And that, my friends, is not a pleasant thought, in any way, shape or form.

Let’s look at a few of the metrics they use. Most importantly is having a low “tax burden” (note the loaded words they use?) — that metric makes up 29% of the entire score in and of itself, and of course the lower the better, even if your state’s schools, roads, bridges, health care systems, etc. are falling apart. The super-rich Koch brothers certainly don’t care – let the little people suffer, they’re doing fine, bwahahahahaha!

The next highest weighting in this “study” (using the word as loosely as is humanly possible) goes to that pressing issue, one that I know all of us sit up nights worrying about, namely “Freedom from Tort Abuse.” What on earth is THAT, you ask? According to Mercatus, “This is what the US Chamber of Commerce calls a state’s ‘lawsuit climate.’ It captures risks and costs that businesses must pass on to consumers as higher prices.” Yep, the virulently anti-government, pro-corporate-welfare US Chamber of Commerce came up with with the metric that makes up another 12% of the Mercatus Center’s scoring. ‘Nuff said.

So yes, the whole thing would be completely laughable if it weren’t so insidious. Alex Pareene of Salon skewers it here, noting that the Koch-funded Mercatus Institute’s “definition of ‘freedom’ largely adheres to the standard American libertarian conception of ‘liberty,’ which is to say it is oriented almost entirely around private property ownership and low taxation.” Thus, North Dakota comes out in the rankings as the most “free” state, even though it just “passed the most restrictive antiabortion laws in the country…[i]ncluding a law specifically aimed at shutting down the state’s lone abortion provider.” In other words, you’re free in North Dakota to have very low taxes and very low services, but if you’re a woman you are NOT free to make important medical decisions, with your doctor, about your body. Is this the combo “Atlas Shrugged”/“The Handmaid’s Tale” version of “freedom” or what?

By the way, just in case you’re at all interested, Virginia is considered by the Koch brothers, aka Mercatus, as “one of the freest states in the country, ranking eighth overall,” in part due to ” Virginia’s status as a right-to-work state.” Lovely, huh? Meanwhile, just to our north, our unfortunate brethren in Communist Maryland suffer at #44, despite the fact that you can marry who you want there, while Virginia enshrines discrimination into its state constitution. Got that? I’d also note that, as a general rule, the “blue” states – the ones that are huge net donors to the “red” states – are considered less “free,” while the “red” states – huge net recipients of federal largesse, with the lowest education and health rankings in the country – are considered the most “free.” To put it another way, if you were dreaming up a dystopian vision of America, and ranking the most dystopian states the highest and the least dystopian the lowest, you’d basically have…the Mercatus Center study. What an embarrassment.