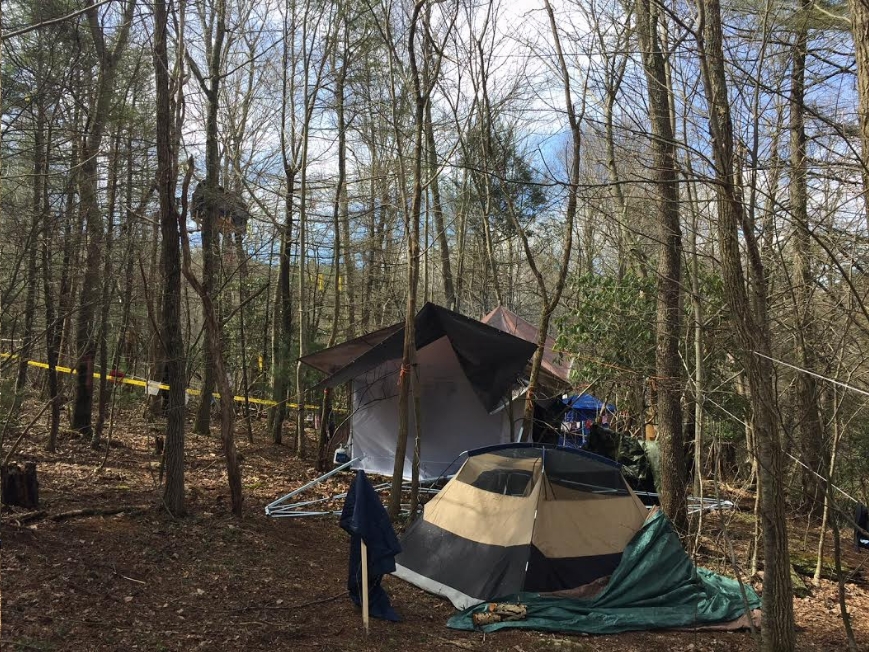 “We few, we happy few, we band of brothers…” – Shakespeare, Henry V

When the story is told of the People’s fight against the destruction to our land that the Mountain Valley Pipeline and the Atlantic Coast Pipeline is causing, what will you tell your children and grandchildren and nieces and nephews and family around the Thanksgiving table?  Children will want to know if you were with the Patriots who fought to open Pocahontas Road in Giles County, Virginia for the people to come and exercise their First Amendment rights on their public land that a young monopod sitter is protecting.  (The site is now a shrine in all senses of the word.)

People want to come speak to the sitter and each other, and to listen. Many will make the trip to worship at this site. The press will have access again to set up equipment to spread to the world what our government does to First Amendment protesters when a powerful energy corporation tells our government to shut down the protests.  “Make an example of that young woman.  Starve her out. Cut off her support.  Make her crazy.”  One can only imagine what agents of a corporation driven for profits will do or say.

WHAT ABOUT “NUTTY”?
Everyone was going to see “Red” Terry in Roanoke County on her family land, but no one was going to see “Nutty” sitting in a tree in our National Forest. Why? In Red’s case, the extended family and friends who sit vigil 24 hours a day have the path to Red made easy with little foot bridges built over a stream and a creek. Thanks to Delegate Sam Rasoul, the corporate media, citizen journalists, activists and others, Red started getting jail food from her guards on Sunday last. In Nutty’s case, the National Forest Service has made reaching Nutty impossible for all but the fit and hearty with great quads and joints.

HOW DID I GET HERE?
That’s not me, but I did not know it until 45 minutes into the hour and a half cross-county hike through some of the steepest terrain up on the mountain. 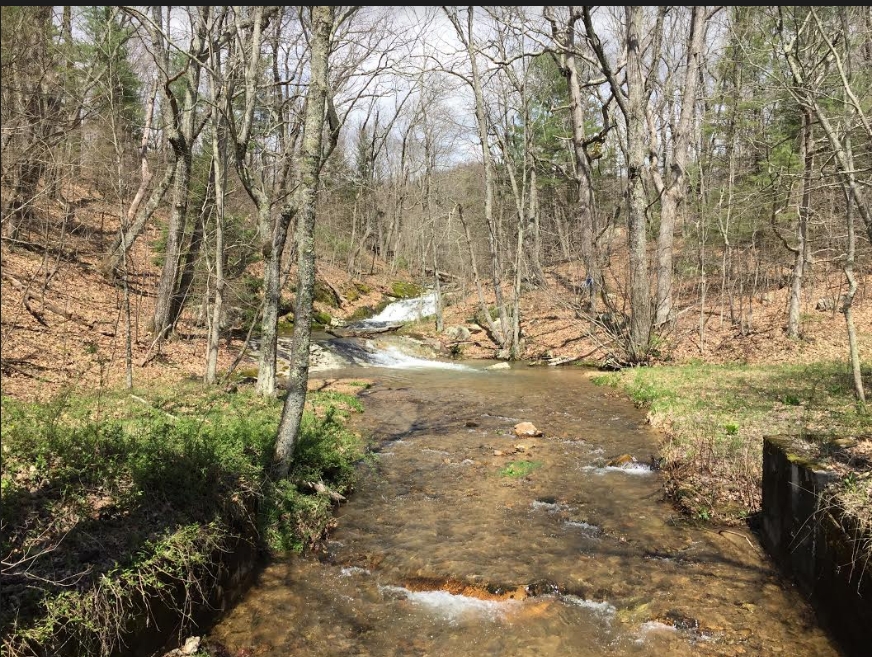 I was exhausted, breathing heavy, sitting on a rock looking 125 feet away at a nice mountain road that the National Forest Service (NFS) agents kept driving up and down as I struggled. I could not cross the imaginary 125-foot line set in the forest a few feet away. If I stepped onto the road, this NFS officer that eye-balled me on the way in would surely arrest me. I promised my wife that I would not get arrested, but I also told her it would be just like walking our mountain land in Floyd. Ten minutes ago, I had told Chap Petersen and our guide to go ahead and get Chap up to Nutty to see her.  I had to yell, “I’m an Eagle Scout. I’ll find my way.” NOT.

I got here because when I visited Red on Monday, one of the good people trying to deliver food to Nutty on Earth Day came running up at Red’s encampment. He had been arrested. The National Forest Service agents had just released him after having carried him to the hospital in shackles for a medical emergency.

He told the story of his arrest in a panic, thinking the police at Red’s might arrest some of her visitors that day. I told him that Jon Sokolow was there, an important man and former attorney for the United Mine Workers, and we were safe.

I could not sleep Monday night, thinking of that woman starving.  I reached out to my friend, State Sen. Chap Petersen, and told him that we needed to do something for this poor, starving woman only there to protest peacefully. It’s our government doing this to her.

By Wednesday, Chap had cleared his schedule to go see Nutty and the police presence denying her food and water, and her supporters’ encampment.

Chap left Fairfax at 6 am Thursday morning. I lost my keys, but left Virginia Beach by 7 am. 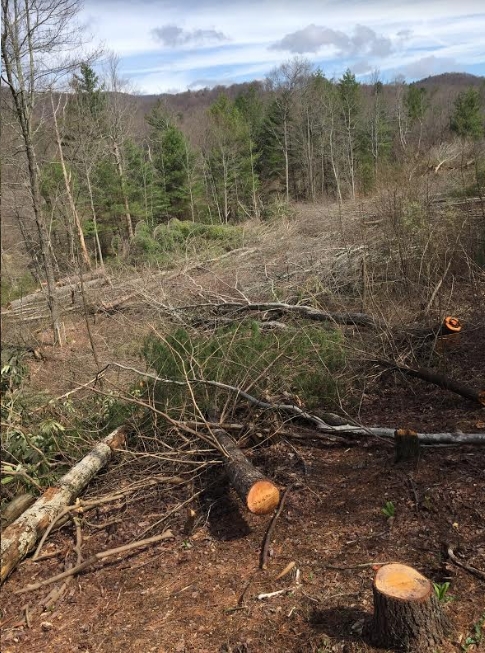 At 1:30 pm, I arrived at Gillie’s in Blacksburg. Chap had been there already working on his cases for Friday that he could not reschedule.  We interviewed two of the arrestees who had tried to get food to Nutty. Chap and I then headed out in an old farm vehicle with our guide, to drive an hour to see the damage from the pipeline clearing and to reach Pocahontas Road, a public road, from which everyone but MVP personnel are banned.

We parked on the side of the state highway and walked up to the beginning of Pocahontas Road. Two NFS officers stared at us.  One told the guide to keep us cross-country and off the road.  The male officer was kind and understanding. His superior female officer looked at me sternly as I waved.

Well, I was sitting alone thinking, a woman is dying; I can make it another 45 minutes. I play tennis and do yoga, but this hike is a different animal at age 65.

After resting, I started heading up the mountain and got off the trail marked every few hundred yards with a pink tape.  After slipping and sliding over the ravines, I spotted a pink tape. I got back on the trail. Stopped another three times, and then I came upon the encampment and shouted, “Alleluia!”

Chap had already talked to Nutty. Before I could talk to her, she had to rest for fifteen minutes.  (The police are now sending medics up to be available, but Nutty will not speak to anyone associated with MVP and law enforcement.)

I started to talk. I had spent six hours driving and an hour and a half wandering in the woods.  I got a little emotional after I had been talking to this woman, dying for her legitimate cause that so many people support. In the middle of my talking and feeling the spirit, that National Forest Service officer who had looked at me sternly at the entrance came out of one of the tents with a camera with a long telescopic lens on it.  She pointed the lens at me and started clicking away. I saw her out of the corner of my eye. I stopped speaking and turned to her. I pointed straight at her and yelled, “My name is Henry Howell, Bar number 22274. Write that down.”

The sad truth is, power will corrupt anyone if the moorings to truth and history are broken. So for all my effort and good intentions, I am reduced to a picture and name on my US Forest Service’s national watch list, possibly for so-called “ecoterrorists” (even though this protest has been completely non-violent). 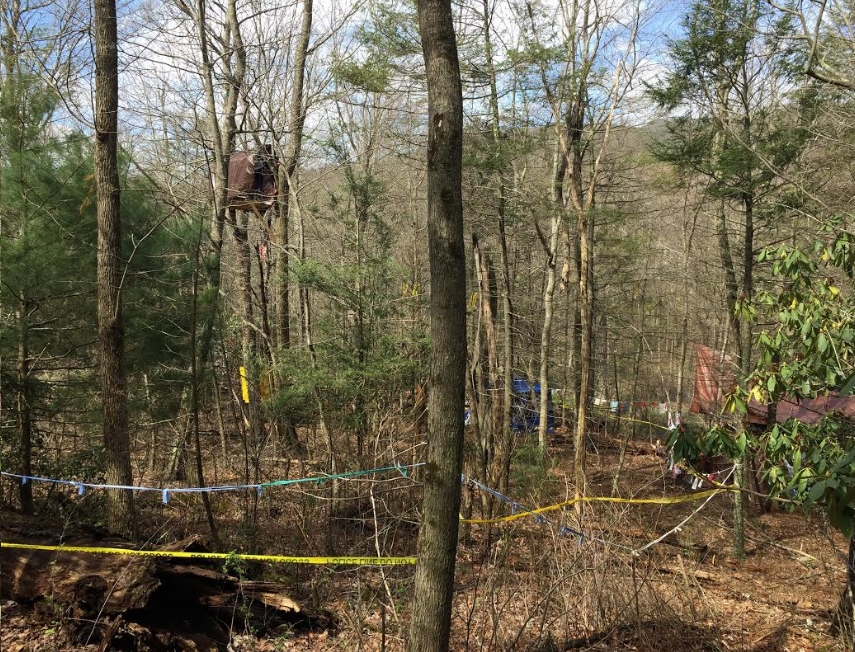