UPDATE 8/6: Statement from Tom Lopach, President and CEO of the Center for Voter Information: “The Center for Voter Information recently sent Vote By Mail applications to voters in Virginia, encouraging them to safely participate in democracy. We are aware that some of the mailers may have directed the return envelopes to the wrong election offices, particularly in the Fairfax area of northern Virginia. Please rest assured that we are working with local election officials to re-direct the Vote By Mail applications to the proper locations, and will rectify any errors at our own expense.”

Did you get a letter with a prefilled absentee ballot application? Did you happen to look at the prepaid return envelope? Notice something wrong with the destination address?

Today, tens of thousands of voters received a mailer from the Center for Voter Information, a nonpartisan 501c4 organization, encouraging them to request an absentee ballot for the General Election. Unfortunately, as many (many) people noticed, the destination address for the prepaid return envelope was for the wrong jurisdiction. And this all comes down to the fact that some jurisdictions have the same name as another, just one is a county and one is an independent city.

We all know that non-Virginians often don’t know that we have independent cities that are distinct from counties; they have their own elected officials, government buildings, and yes, even General Registrars. And this carries over to national organizations, printers, and mail vendors. For most jurisdictions, the name of the independent city isn’t the same name as a county. But for some, including Fairfax2, it is. This is where the problem with the CVI letter stems from.

To clear up any confusion about where you should send the absentee ballot application, I put together this handy guide to give you the correct address of your jurisdiction’s registrar. I only included that of the same-name jurisdictions where this issue seems to exist. If you live in a place with a unique name, please still double-check the address on the prepaid envelope included with the letter.

Note, if you already sent in the application with the wrong destination address, check the status of your application here. If it does not get marked as received in the next couple weeks, contact your registrar to see if they received it from the other jurisdiction’s registrar.

Or better yet, submit an online application.

Ultimately, we don’t know the extent of this problem. I encourage everyone to contact CVI to lodge a complaint. This is not the year to spread so much misinformation and its actions like this that create further distrust of our vote by mail system, which regularly sees exceptionally low number of incidents. 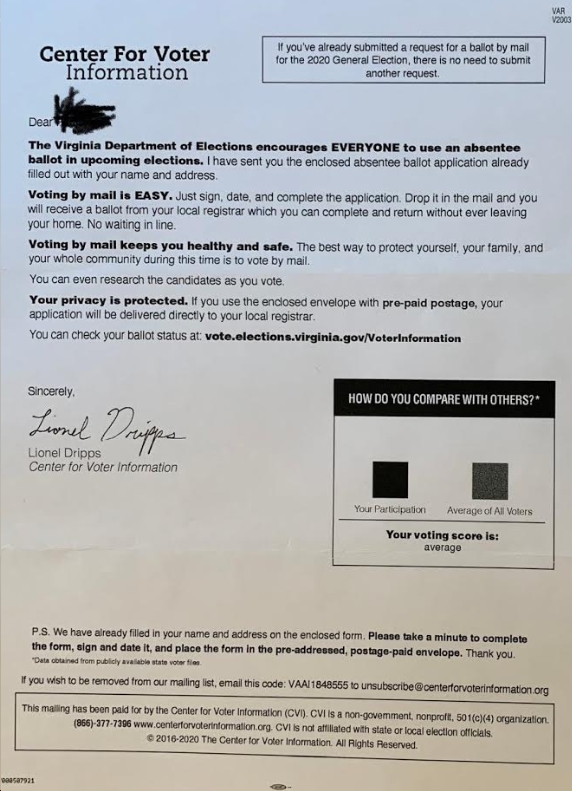