As the Arlington County Democratic Committee (ACDC) prepares to vote tonight on whether or not to take a stance in support or opposition to the constitutional redistricting amendment, the debate has most certainly been engaged. For instance, yesterday, State Senators Adam Ebbin, Barbara Favola and Janet Howell wrote this letter, arguing – among other things – that the amendment is “not a secret Republican plot to gerrymander in their favor,” that it will “institute a fully transparent process,” will result in legislative district lines being “drawn fairly” and not favoring “one party over the other,” etc.

In response, Arlington Democrat Mary Detweiler put together the following comparison table, with counterpoints to the Ebbin/Favola/Howell letter. See below for that. Also see below the comparison table for a rebuttal by Fairfax Democrat Chris Ambrose. Personally, as you know if you’ve read this blog at all the past few months, I strongly oppose this amendment, for all the reasons cited by Mary Detweiler and Chris Ambrose. I also urge the Arlington Democrats – and every other local Democratic committee – to recommend a “no” vote on the Democratic sample ballot this fall. With that…here are the rebuttals to Ebbin/Favola/Howell. 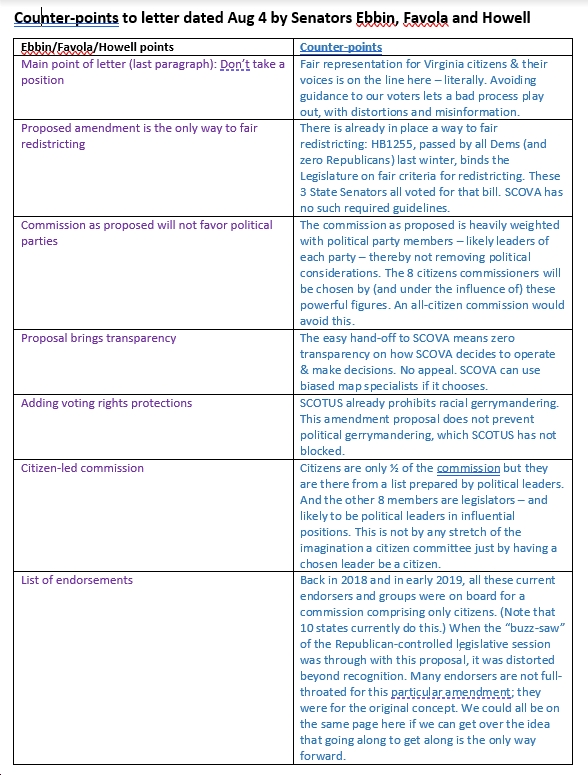 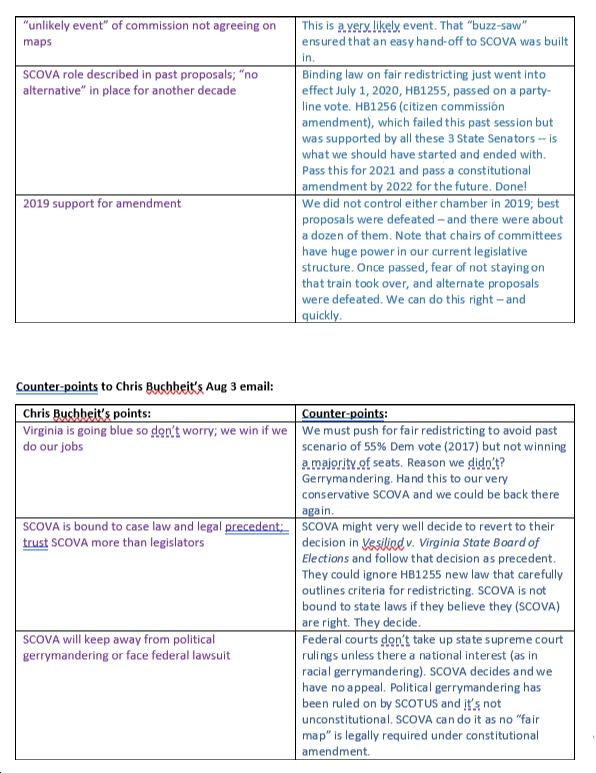 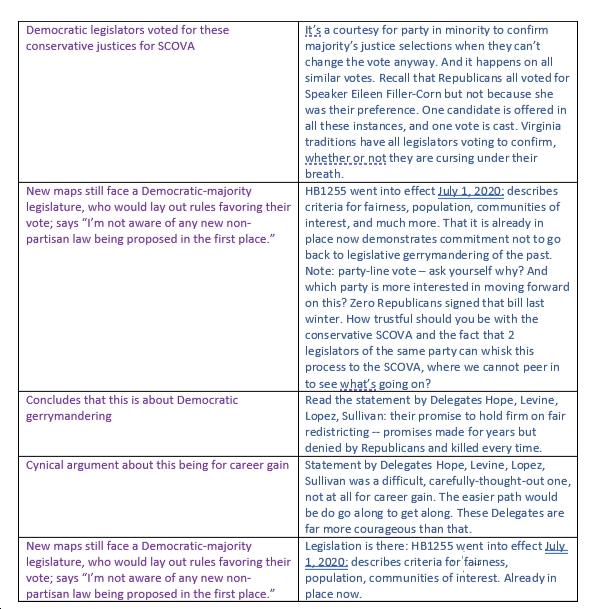 WHY DEMOCRATS SHOULD OPPOSE THE REDISTRICTING AMENDMENT

Senators Favola, Ebbin and Howell have drafted a letter urging the ADC not to oppose the flawed redistricting amendment. Democrats should oppose this amendment at the polls and local Democratic Committees should encourage them to do so as the State Party and the Fairfax County Democratic Committee have already done.

The Senators lay out the reasons why, in their view, the amendment should be supported. While some are examples are correct, they give them outsized importance. But the real point is that many of those points are simply not correct. The most important of those inaccuracies go to the core of the amendment: The suggestion is that it is a citizen led, independent process that will end gerrymandering.

This may be a complex issue for some, but it is not really that tough a call when you examine the facts:

First, let me address the Supreme Court of Virginia (SCOVA) which gets an outsized amount of attention. I take a slightly contrarian view on this. I want to get that discussion out of the way so I can address the REAL flaws in this amendment that are getting drowned out by all the SCOVA discussion.

Anyone who thinks that the Virginia Courts which have shown again and again that they will intervene in electoral matters to advance Republicans will be some neutral body to entrust redistricting to is not facing up to reality. It is the nature of Democrats to trust our institutions, but the courts in Virginia and the nation have been thoroughly corrupted by Republicans. One only has to look at Bush V. Gore or right here in VA where in 2017 the courts ignored the law governing recounts and reintroduced a ballot that under the law was not subject to recount to steal an election win from Shelly Simonds, handing the House of Delegates to the Republicans that year.

While there is no doubt that the Republican controlled Court will favor Republicans during redistricting, I do differ with some Democrats that they will conduct a gerrymander as bad as a Republican legislature would have. They will help the Republicans around the edges and give them 1, 2 or 3 more seats, not 7 or 10. But that influence will force Democrats to accept a deal that is not fair for Democrats.

The amendment also contains no criteria for those citizens. They could be retired general assembly members, family members of legislators, donors, or lobbyists. Whether the legislature chooses to be that blatant remains to be seen but make no mistake about it – nobody will get on that commission who is not going to do the legislators’ bidding for them. This is a transparent effort to trick the voters into voting for a commission that is nothing but window dressing, while the General Assembly retains control over the process.

Yes, there is a veto (which sends the maps to SCOVA) which will minimize the bad partisan gerrymanders, but partisan gerrymandering will not disappear entirely because of a variety of weaknesses in the amendment. Some of those include the fact that the General Assembly retains control over directing the commission on setting the criteria for drawing districts and SCOVA’s role as already discussed. A future Republican General Assembly will certainly repeal the Democratic criteria legislation and set criteria that will be beneficial to Republicans.

Don’t take my word for it. Take a look at the only state that has a similar system, NJ. They are a great comparison because they hold their legislative elections in the same years we do. Over the past decade since the 2011 redistricting, just over a half dozen incumbents in NJ have been defeated – in over 500 elections! No wonder a Fair Districts NJ, a reform group, has been fighting for years to get rid of that system. But it is an uphill battle because it is such a great system for the incumbents. Why would we want to replicate that mistake here?

During the same period in Virginia, even with the broken system we have now, 23 incumbents were defeated. OUR CURRENT DISTRICTS ARE THREE TO FOUR TIMES AS COMPETITVE AS THE SYSTEM WE ARE LOOKING INTO MOVING TOWARD! That is not to mention that six Republicans retired in 2017. Had they ran for re-election that year many, perhaps all, would have been added to that total of 23 defeated incumbents. Wild partisan gerrymanders overreach, so they remain vulnerable in a wave year. Incumbent protection gerrymandering essentially guarantees a legislator a job for like.

Even though I could, I don’t want to go on any longer on this, but will conclude by addressing a few more of the Senators’ points:

Transparency: Yes, the amendment brings a degree of transparency that is good. But for me the fact that legislators will have to gerrymander in full view rather than behind closed doors is not a sufficient reason to support it.

Historic Voting Right protections: The amendment essentially says that the commission will draw districts consistent with the law and the constitution. Last time I looked that was already required. I don’t know what is so historic about saying they are required to follow the law. What’s more, the amendment specifically refers to the Voting Rights Act, which is on life support. If that law is overturned, the protections go away.

All the groups that have endorsed this: I am not aware of a single group that enthusiastically endorses this amendment. They all use the “this is better than nothing argument” and “we can’t let perfect be the enemy of the good.” But this amendment is so far from perfect, that it is not good. There is a certain degree of institutional inertia that is pushing reform groups to support this. OneVirginia2021 has based their existence on this and promised their supporters and donors they will deliver. If I were being paid to head that organization, I would be supporting it too – that would be my job.

Many of the individuals and groups supporting it have changed their positions. For example, Eric Holder supported alternative legislation last year. When that failed, he grudgingly accepted the amendment. Many have also mischaracterized what the amendment does. These groups all stick together because they want the support of each other in a future reform initiative. For these reasons, I would treat most of those endorsements with a grain of salt.

For all this explanation, the reason to vote against the amendment can be summed up with the following line:

Why would we want to create a system that builds into the constitution a process for elected legislators to choose their voters (of course in a bi-partisan manner!) rather than the other way around?