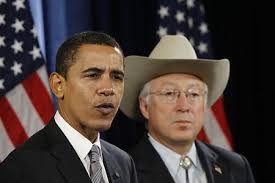 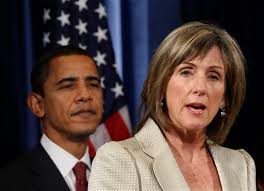 I just got off a conference call with Secretary of the Interior Ken Salazar and Carol Browner, Assistant to the President for Energy and Climate Change, the subject of which was “our nation’s energy security and the Administration’s efforts to reduce our dependence on foreign oil, create jobs, and lead the way towards a clean energy economy.”  Here are a few highlights, with particular focus on Virginia. {Also, click here for a press release on the “Comprehensive Strategy for Offshore Oil and Gas Development and Exploration”}

*Browner emphasized that this is a comprehensive energy strategy to reduce dependence on foreign oil and create a clean energy economy. It includes fuel efficient cars, advanced biofuels, nuclear power, energy efficiency, “greening” the federal vehicle fleet, efforts by the Defense Department “to enhance energy security and independence and reduce harmful emissions, including encouraging the development and use of domestically produced advanced biofuels,” and offshore oil drilling.

*Browner emphasized that we “can’t drill our way to energy independence.”

*Salazar stressed that the Obama administration’s energy plan is “balanced” between development and conservation.  He emphasized that development needs to be in the right places with the right information. He said we need a “cautious approach” to Arctic development.

*Salazar also pointed out that “we’ll never drill our way to energy independence.” He noted that there’s a “relatively minor amount” of oil in the Outer Continental Shelf, definitely not a “panacea.”  He added that there are perhaps 100 million barrels in the eastern Gulf of Mexico.

*Browner said that the automobile fuel economy rules to be announced tomorrow will save “1.8 billion barrels of oil over the life of the program.”

*Salazar said that the Arctic is a “special place,” that we need to move forward with the science and find out what’s there.

*With regard to Virginia, Salazar said that the plan is to move forward with the process for lease sales, with a decision possible by late 2011/early 2012. A decision will be made after evaluation of environmental issues and also potential conflicts with military training needs.

*In response to a question by the Virginian-Pilot, Salazar said that we know very little about oil resources in the Atlantic, that the information is 30 years old, and that we “owe it to the American people” to make decisions based on good information.

*Salazar stressed the importance of offshore wind, stating that the quality of the wind resources off the east coast is very high, and that transmission issues aren’t significant compared to many other locations. Salazar added that we need to develop energy from many sources, and that he doesn’t see offshore wind and oil development as being “in conflict” with one another.