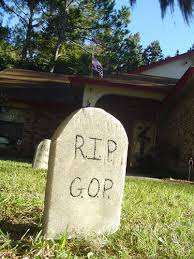 This is amazing, I strongly recommend that everyone read it. Here’s the beginning:

The years have not been kind to you. I grew up in a profoundly Republican home, so I can remember when you wore a very different face than the one we see now.  You’ve lost me and you’ve lost most of America.  Because I believe having responsible choices is important to democracy, I’d like to give you some advice and an invitation.

First, the invitation:  Come back to us.

Now the advice. You’re going to have to come up with a platform that isn’t built on a foundation of cowardice: fear of people with colors, religions, cultures and sex lives that differ from your own; fear of reform in banking, health care, energy; fantasy fears of America being transformed into an Islamic nation, into social/commun/fasc-ism, into a disarmed populace put in internment camps; and more.  But you have work to do even before you take on that task.

Your party — the GOP — and the conservative end of the American political spectrum has become irresponsible and irrational.  Worse, it’s tolerating, promoting and celebrating prejudice and hatred.  Let me provide some expamples — by no means an exhaustive list — of where the Right as gotten itself stuck in a swamp of hypocrisy, hyperbole, historical inaccuracy and hatred.

If you’re going to regain your stature as a party of rational, responsible people, you’ll have to start by draining this swamp:

What follows is an exhaustive list, duly cited and linked, of conservative “hypocrisy,” “hyperbole,” misunderstanding of “history,” and of course “hatred.”  As my friend Josh says, “Quite possibly the greatest takedown of conservative hypocricy, hyperbole, and hatred in history.” Check it out.

Video: After Failing to Draw New District Lines for the General Assembly, the VA Redistricting Commission Teeters on the Edge of Failure on US...