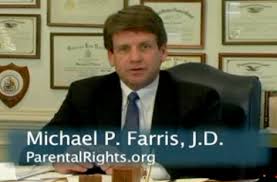 It looks like Bob McDonnell’s “base” isn’t happy about his “executive directive” on anti-gay discrimination in state employment.

“I think this action is incredibly disappointing, to the point of being shocking,” said Michael P. Farris, the chancellor of Patrick Henry College, a private Christian college in Loudoun County. “The deeper message it sends is that people who think homosexuality is a sin are wrong. They are irrational.”

Farris, a lawyer and constitutional scholar who ran for lieutenant governor in 1993, said he thinks McDonnell’s policy statement will be used in courts to help challenge Virginia’s constitutional amendment banning gay marriage, which McDonnell supported. “I don’t think the people advising him were doing anything other than reading polls,” Farris said.

In addition to Farris, we’ve also got “Sideshow” Bob Marshall calling McDonnell’s directive no more than “a press release with fluff around it” and Virginia Cobb of the Family Foundation declaring that “adding additional classes of persons to the Commonwealth’s non-discrimination policy is unnecessary.”

The bottom line is that McDonnell may have defused this issue with most people, but he doesn’t appear to have mollified his “base” in the least.  Unfortunately for McDonnell, defusing social issues while not completely pissing off his base is going to represent a continuing, and difficult, challenge on “social issues” like this one, all while he attempts to be the “Bob’s for Jobs” governor in the middle of a deep recession. If he can pull all that off, I’ll definitely take my hat off to his political skills.  If he can’t, well, he didn’t really want to be president anyway. 🙂

UPDATE: VA Social Conservative writes, “I also have to side with Dr. Farris in expressing my disappointment in Governor McDonnell. If you can’t stand up for traditional values when the law is on your side and the General Assembly is with you, when can you?”