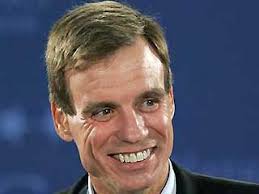 This morning’s edition of The Hill has an article on Mark Warner that he’s got to be very happy about. Entitled, “Sen. Warner gaining more influence,” the article reads like a piece of (Mark Warner) campaign literature.

Among other things, the article quotes Sen. Lindsey Graham as saying “[Warner]’s an easy guy to work with.” It has John Podesta calling Warner “one of the few people that can still have a civil conversation with people across the aisle.” It quotes Sen. Bob Corker describing Warner “the best partner anybody could possibly imagine.” It refers to a “senior Democratic aide” calling Warner “a promising candidate” for Majority Leader if Harry Reid loses reelection. It says Warner has worked “behind the scenes…to unify junior Democratic senators,” that he “has won rave reviews from business leaders,” and that “Senate Democratic leaders view Warner as one of the more promising new members of the conference and have given him challenging assignments.” And it quotes the head of the Business Roundtable, praising Warner as “one of those few members of the Senate who understands the business side and gets how the business has to operate.”

As I said, this article could be a piece of Warner campaign literature. The only question is, what will Warner run for next?