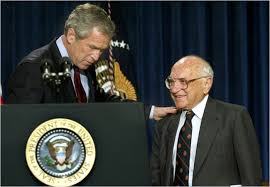 What would the patriarch of capitalism, economist Milton Friedman himself, have to say about the new Health Care Reform bill?

Milton Friedman, as I am sure you recall, was the chief founder and promoter of the Free Market theory of capitalism, which was, of course, the political-economic theory that has utterly dominated everything from Wall Street to MBA schools to the World Bank and International Monetary Fund (not to mention both our political parties), that brought us globalization and eventually defeated Soviet Communism in the world market of ideas, or so say Reagan Republicans.

Almost every speech (and rant) against the Health Care bill is replete with references to Friedman’s doctrine, despite the fact that the bill itself is extraordinarily careful to preserve “market-based” solutions—- remember, President Obama himself took off the table any government (i.e., socialist) competition in the form of even a diddly little public option, which makes it all the more puzzling when we hear major blowouts about “socialism” and the end of America, that the government is taking over one-sixth (or more) of our economy.

Friedman made a speech in the 1970’s about health care in America and it is now circulating among the fanatical acolytes of the Free Market, providing them with more fodder in their war against anything (and I do mean anything) which might frustrate establishment of their idea of  Free Market Nirvana. That naturally includes almost everything Obama and the Democrats are doing, and most especially reforming health care.

In analyzing who “won” and who “lost” in the Health Care bill, Forbes magazine decided that doctors lost, mainly because they did not get tort reform, and their reimbursements for Medicare might go down, leading Forbes to conclude that doctors are naive. Listen to what Friedman had to say about doctors: he wanted to abolish licensing of doctors entirely, along with every other government licensing of every other profession. That is his idea of a free market…. and it is all of a piece, indivisible from the rest of his economic jungle-theory: no government regulation of anything.  Quacks  would kill so many paatients that ill folks would avoid them, and thus the market would force them out of business. Too bad about the collateral damage.