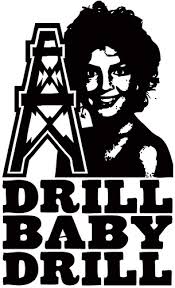 Is Barack Obama about to open up Virginia’s coast to offshore oil drilling?  According to this and this, it sure looks like the “drill baby drill” crowd is going to get its wish.

In a reversal of a long-standing ban on most offshore drilling, President Barack Obama is allowing oil drilling 50 miles off Virginia’s shorelines. At the same time, he is rejecting some new drilling sites that had been planned in Alaska.

The president’s Wednesday remarks would be paired with other energy proposals that were more likely to find praise from environmental groups. The White House planned to announce it had ordered 5,000 hybrid vehicles for the government fleet. And on Thursday, the Environmental Protection Agency and the Transportation Department are to sign a final rule that requires increased fuel efficiency standards for new cars.

I have three immediate reactions.

First, as Tom Perriello has said, offshore oil drilling is a “2 cent solution to a 4 dollar problem.”  The problem, of course, is America’s heavy dependence on oil imports, and the negative national security implications that flow from this dependence. As former CIA Director Jim Woolsey says (quoted on the Operation FREE website), “We pay Saudi Arabia $160 billion for its oil, and $3 or $4 billion of that goes to the Wahhabis, who teach children to hate. We are paying for these terrorists with our SUVs.”   How do we break this dangerous “oil addiction?” By far, the biggest “bang for the buck” is increased efficiency of our vehicle fleet. It’s not even close.  In contrast, offshore oil drilling in the United States – a “mature oil province” where the production cost of a marginal barrel, certainly a marginal barrel offshore, is relatively high by world standards – represents the low end of the “bang for the buck” scale. Why would we focus our efforts on the low end of the “bang for the buck” scale instead of the high end? Got me.

Second, this is political pandering to the nth degree. Let’s face it, “drill baby drill” is popular with the American public, especially with Republicans, and this is clearly an attempt to mollify those folks. We’ll see if it works, but I’m skeptical, especially given the vicious opposition to health care reform, despite the fact that it provides tremendous benefits to most of the people protesting it. Perhaps opposition to Barack Obama isn’t coming mainly from reasoned differences with his policy choices?

Third, this announcement, if it ever was made at all, should have been made only as part of a “grand bargain” on energy and climate change. In that context, I could see environmentalists conceding offshore oil drilling, in certain areas  and under tight environmental rules, in exchange for putting a price on carbon; establishing an aggressive, national, renewable portfolio standard; investing heavily in energy efficiency and other, non-carbon-emitting energy sources (wind, solar, geothermal, wave, tidal, possibly even nuclear); cranking up fuel economy standards for automobiles and research into battery technology; building a national, “smart grid;;’ etc.  Unfortunately, what I see here is very little (5,000 hybrid vehicles? is that a joke?) in exchange for opening up our coasts to oil drilling.  This is more like the “ExxonMobil Corporate Welfare Act of 2010” than the “Energy Independence and Climate Protection Act of 2010.”  That’s a major, missed opportunity. It’s also not the “change” many of us who voted for Obama can believe in.

UPDATE: The more I think about this, the more I’m wondering if Obama isn’t being very clever here by “calling the bluff” of the “drill baby drill” crowd.  As a commenter at Daily Kos writes:

This pretty much gives the “drill here, drill now, pay less” crowd the opportunity to put up or shut up.

After this makes no difference to oil prices, because the US no longer has any economically recoverable oil reserves (if we did, we’d have drilled there decades ago), maybe they’ll have to admit we have a problem.

Obama’s decision “continues to defy the will of the American people,” Boehner said in a statement, pointing to the president’s decision to open Atlantic and Gulf of Mexico waters, while leaving Pacific and many Alaskan waters largely closed to exploration.

Amazing, who would have ever predicted that Republicans wouldn’t rush to praise Obama for his “drill baby drill” (wide) stance? I’m shocked, shocked I say! Heh.

I thank the President and Secretary of the Interior Ken Salazar for ensuring Virginia will be the first state on the East Coast to explore for and produce energy offshore. The President’s decision to allow energy exploration off Virginia’s coast will mean thousands of new jobs, hundreds of millions in new state revenue and tens of billions of dollars in economic impact for the Commonwealth. It will also help our nation take a further step towards energy independence. Environmentally-safe offshore energy exploration and production is good for Virginia workers, the Virginia economy and national security. Just this session the General Assembly passed, with bipartisan support, legislation I requested to authorize offshore oil and gas exploration and drilling and to allocate 80% of revenues to transportation and 20% to green energy research and development.

The effort to ensure that Virginia stayed on track to hold an offshore lease sale as expeditiously as possible has been a bipartisan one at the federal level as well. I want to specifically thank Senator Mark Warner, Senator Jim Webb and Congressman Eric Cantor for their leadership and advocacy on the issue. I also want to thank all the Republicans and Democrats in our Congressional delegation who have strongly advocated for offshore energy production.

With today’s announcement, oil and gas can be produced in an environmentally-safe manner 50 miles off Virginia’s coast. Virginians will benefit from the thousands of jobs that will be created and the economic activity and development that will accompany this vital industry’s arrival in the state. However, to fully participate in the positive impact of offshore energy development, the Commonwealth must be included in all royalty and revenue sharing arrangements, in a manner equivalent to what the Gulf Coast states currently receive. Congressman Bob Goodlatte has already introduced legislation, with bipartisan support, to ensure revenue sharing.  I urge our federal representatives to immediately move forward in ensuring Virginia receives our fair share of the revenues derived from our natural resources. I am confident that the United States Congress will act appropriately and expeditiously to ensure this occurs.

Offshore energy production is one part of an “all of the above” approach to ensuring energy security. It is an important component of the comprehensive energy policy that we must enact to move towards greater domestic energy security. We will also do more in Virginia to promote and produce other sources of energy in our borders, including wind, solar, biomass, coal and nuclear. Today’s announcement means future new jobs for Virginians and much-needed revenue for our Commonwealth. Again, I applaud the President for his decision, and thank all the Virginia leaders from both parties who have worked together to make this announcement possible.