UPDATE: Oops! Of course, it was President George Washington who signed the 1798 law. That is even better, since of all the Founding Fathers, he would be the most prominent (the Founders’ Founder so to speak), and could not be deemed a wild-eyed socialist by even the most dedicated Right-winger) 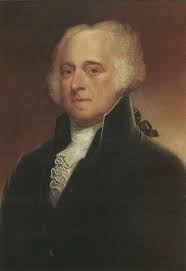 To hear the obstructionists on the Right tell it, the recently passed Health Care law is rampant socialism, a government takeover, the destruction of America as we know it, and, as 14 states’ Attorneys General (13 of them Republicans) put it, very unconstitutional. Have you noticed how these obstructionists pivot so quickly from being enamored with Alexander Hamilton (pro-big central bank) or the 18th century Federalists (pro-strong federal government) to being interpreters of Thomas Jefferson (pro-periodic revolution) or the slave-owners who at the Philadelphia Convention demanded a limited federal government—- all depending on whether a Republican was in the White House (first case) or a Democrat (second case)?

One wonders how these naysayers will deal with the fact that an 18th century US Congress passed in 1798, and a prominent Founding Father, President John Adams, signed into law a federally mandated socialized health care system, including the collection of a federal tax to pay fot it?

Paul J. O’Rourke, a self-confessed free marketeer, brought this law to our attention.  The law required the owner or captain of every ship entering a US port to account for the number of seamen employed thereon, and to deduct from every seamen’s wages twenty cents per month, to be paid into an account which would provide hospitalization as well as private medical care for injured or ill seamen.

Remember, twenty cents was a considerable sum in those days, and it was enough to set up a system of hospitals which worked so well that in 1799 it was extended to members of the US Navy, who used it until the Navy established its own system years later. Except in wartime, Merchant seamen in the US have been considered to be employed by the private sector, yet this setup, basically a form of socialized medical care, continued. Ships’ owners or captains were fined 100 dollars if they failed to account accurately or collect and pay the federally mandated tax (fee?)?

The rationale behind such a law was that a strong and healthy workforce was essential to build an economy which would compete successfully in the world economy. This would certainly fit today as well. Indeed, the system was expanded as America grew, and eventually turned into the federal Public Health Service.

“I’m a fan of the free market, and especially that forgotten 3rd word — competition.  If we continue with this fairly well established, out of balance system, we are resisting, not enabling competition…. However, a private market solution is always the preferred default. But sometimes it just doesn’t work.”

In discussing this 1798 law, Lauren Monica at Daily Kos offers a direct quote from the record.

CHAP. LXXVII – An Act for the Relief of Sick and Disabled Seamen Section 1. Be it enacted by the Senate and House of Representatives of the United States of America in Congress assembled – That from and after the first day of September next, the master or owner of every ship or vessel of the United States, arriving from a foreign port into any port of the United States, shall, before such ship or vessel shall be admitted to an entry, render to the collector a true account of the number of seamen, that shall have been employed on board such vessel since she was last entered at any port in the United States,-and shall pay to the said collector, at the rate of twenty cents per month for every seaman so employed; which sum he is hereby authorized to retain out of the wages of such seamen

Why did Anglo-American society lavish such attention on health care for the merchant marine? First, mercantilist economic theory emphasized the importance of a healthy maritime labor force. In mercantilism, economic dominion was the extension of war by commercial means. Countries vied with one another for control of the most markets, over the broadest expanse of land. Mariners were the foot soldiers in this race for global power. But governments also regulated maritime health for moral reasons. In Anglo-American society, mariners were partially free and partially unfree laborers. It was believed that the mariner had volition enough to choose his course and negotiate for wages. But it was also believed that the mariner lacked sufficient sense to care for his own wellbeing. From this sentiment arose the infamous stereotype of “Jack Tar” as a coarse, hard-drinking character who purposefully exposed his own body to great harm. If Jack Tar failed to care for himself and if commerce and society so depended on Jack Tar, was it not society’s responsibility-and was it not in society’s best interest-to preserve and protect the mariner for his own good and for the public good? As Maine Senator F. O. J. Smith put it in 1838, “both the Government and the merchant” had “almost the same abiding interest with the sailor himself, in a matter upon which so much depends for a requisite supply of healthy and able-bodied seamen.”