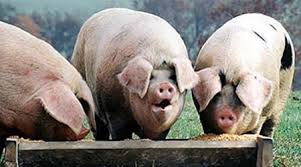 Not that he was expecting it or anything, but it sure looks like Keith Fimian won’t be getting the Washington Post’s endorsement in the 11th CD congressional race. 🙂

…Fimian used a quote from this blog in the very first radio ad of his campaign against U.S. Rep. Gerry Connolly (D).

But when we looked a little closer, we were less amused.

The ad works on a pig theme and accuses Connolly of going after earmarks at a time when the national debt is rising. Pretty standard political stuff.

But then, the radio narrator tells you this: “Gerry Connolly says, quote, ‘I want to be there with all four paws and snout in the trough.’ ”

Connolly did indeed utter that quote during a July conference call with reporters about Republicans and the stimulus package. We put the quote on this blog.

But was he talking about himself? Nope.

He was making a point about Republican Rep. Eric Cantor (R-Va.)…

So, I guess the question is, why is Keith Fimian attacking his fellow Republican, House Minority Whip Eric Cantor? Looks like Fimian’s got a bit of ‘splainin’ to do.