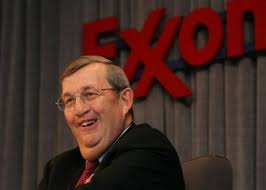 Why? Because ExxonMobil paid $0 in federal income taxes in 2009:

The most hilarious part is ExxonMobil still finds a way to bitch about its lot in life. The corporation’s website includes an issues page on “industry taxes,” which threatens that energy innovation is already on the ropes because of excessive taxes, and it will be forever consigned to the dustbin by any new taxes on windfall profits (or, we’d assume, plans like President Obama’s to close the offshore earnings loopholes that saved ExxonMobil from the IRS this year). “While our worldwide profits have grown, our worldwide income taxes have grown even more. From 2004 to 2008 our earnings grew by 79 percent, but our income taxes grew by 130 percent,” ExxonMobil’s flacks wrote, presumably while playing the world’s smallest-and most expensive-violin.

But I’m sure this should give us no reason to doubt Gov. Bob McDonnell’s promises about how much state revenue will be delivered by handing over our coastlines to Big Oil for drilling … um, right?