I was out canvassing for the Alliance, the folks who are trying to replace the current Herndon town council, when I witnessed, in real time, if not an actual crime itself, then what has to be even more exciting, the CSI for a heinous crime, committed right here in Herndon, VA.

A little background first.  The current membership of the town council is known mostly for its fearlessly wrong-headed advocacy on issues that, even if their stands were not wrong-headed, have nothing to do with the actual business of the town council.  Maybe healthcare and immigration reform are more important issues than zoning — that’s at least arguable.  What isn’t arguable is that neither is at all the business of the council.  That hasn’t stopped these guys and gal from ignoring their real business to spend time on advocacy, Tea Party affiliated advocacy in several cases, over these issues.

So as I was making my way down one side of a street in Herndon last Saturday, knocking on doors to let people know about the election and the opportunity it presents for them to get a council that will do its actual job, I couldn’t help overhearing what one gentleman across the street was saying to a uniformed policeman.  I couldn’t help overhearing because I’m not clinically deaf, and this gentleman was expressing himself at a volume, and with an urgency, that commanded attention.  It seems that a yard sign for Charlie Waddell, one of the incumbents, had disappeared from this man’s yard the night previously.

Now, I am not a certified expert in yard signology, though I am a practitioner in the field, and have extensive experience in the installation and maintenance of standard political yard signs.  Given the 40+ mph winds we had the night before the disappearance of the sign in question, my first guess would have been that the wind blew it away.  Of course, that shallow opinion just proves that I lack the professional qualifications of this gentleman, who was certain that it had been stolen by a covert political operative of the Alliance.  As a mere foot soldier in the not-terribly-vast overt political operation of the Alliance, I cannot say what covert black ops capabilites our team might have squirreled away somewhere (maybe on a secret island base somewhere in Herndon), so I have to defer to this gentleman’s obviously superior knowledge of those covert operations.

The guy went on, and here he really impressed me with his expertise, demonstrating for the policeman several times, the exact method and location of emplacement of the purloined sign.  It seems that he has a very methodical, dare I say, obsessively compulsive, approach to sign emplacement, and so was able to demonstrate, in a dramatic slow motion recreation of the original event, played many times over, every step he took as he paced five steps from his driveway, perpendicular to his driveway, to place the sign with its long axis parallel to the driveway.  He seems to have expected the policeman to be able to use this information to do some fancy technical CSI work that would reveal the identity of the perpetrator, perhaps from shoe impressions still liftable from the grass.  I can’t get inside the head of someone with such evident subject matter expertise, but perhaps the slow motion as he recreated the events was designed to not disturb the grass impressions left by the criminals, since these impressions might be the only way these criminals will ever be brought to justice.

At any rate, the policeman eventually succeeded at moving further discussion indoors, so my ability to report these events ends here.

I made an initial guess that the gentleman in question was Charlie Waddell himself, since he is reported to be a Teabagger, and this gentleman’s behavior fit that profile in many ways.  But neither the picture, nor the address to send money to, at the Waddell website, match up very well with the gentleman I observed, so it remains a mystery how this guy was able to get the police to respond to a suspected yard sign theft case in any fashion that involved more than about 30 seconds of even one policeman’s time.  This guy had over 20 bumper stickers, mostly rightwing political, on the SUV parked in the driveway, which also fits a certain profile.  The numerical count plays roughly the same role in quantity of bumper stickers per vehicle as in quantity of cats per household — 4 or 5 of either just means you’re committed to that activity, while 20 of either means you’re a nut.  That fits the profile as well.

One final detail from this crime scene.  Amid all the partisan bumper stickers was one that proclaims that this gentleman is a Civil War reenactor.  But you, Holmes-like, had deduced that already, hadn’t you, because you read Blue Virginia, where we connect the dots on all the Republican nuttiness, the harmful as well as the harmless, all the doings of these latter-day, self-imagined, Dr. Moriarty knock-offs. 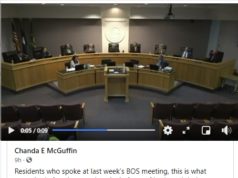