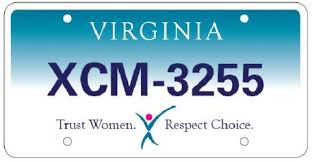 I must say, this is a pleasant surprise.

The plate is the opposite to last year’s “Choose Life” license plate, put forward by pro-life senator, now Attorney General Ken Cuccinelli, and signed by Gov. Timothy M. Kaine. The signing stems a potential legal action considered by the American Civil Liberties Union which argued that the law prohibited discriminating against allowing opposing political viewpoints on the plates.

As with the Choose Life plate, after 1,000 of the Trust Women plates are sold, $15 of the $25 fee goes to Planned Parenthood. The group said it would not use the money to fund abortions, but could spend it on prevention services, such as gynecological exams and testing to the roughly 30,000 women, men and families they serve.

Of course, money raised from the “Trust Women, Respect Choice” license plates will simply mean more money for Planned Parenthood overall, even if it doesn’t use this specific money to fund abortions. I’m not sure if Governor McDonnell understands the concept of “fungibility,” but whether he does or not, this was a good move. Thank you.