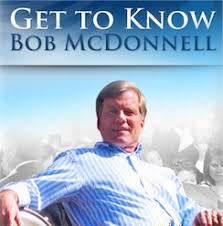 As always, Bob McDonnell proves he is a uniter not a divider.

Gov. Bob McDonnell (R) has quietly declared April 2010 Confederate History Month, bringing back a designation in Virginia that his two Democratic predecessors — Mark Warner and Tim Kaine — refused to do.

Sen. A. Donald McEachin (D-Richmond) said he was “stunned” to learn of McDonnell’s decision and even more stunned that the proclamation did not include any reference to slavery. “It’s offensive,” he said.

I guess Bob McDonnell’s decided if he can’t return Virginia to the 1950s, he’ll take us back to the 1860s. At least, back to the Confederate part of the 1860s, not to the messy Union or slavery parts. Heh.

UPDATE: The comments on the Washington Post are absolutely scathing, and there appear to be hundreds of ’em. This decision appears to have really hit a nerve, but definitely not in the way McDonnell intended.  No wonder why he made this declaration “quietly.”