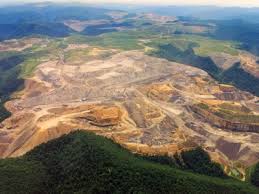 Could the ruinous (environmentally, economically, you name it) practice of “mountaintop removal” coal mining be coming to an end sooner rather than later?  Based on this, it sure looks like a possibility.

The Environmental Protection Agency on Thursday announced new pollution limits that could sharply curtail “mountaintop” mining, the lucrative and controversial practice that is unique to Appalachia.

The decision, announced Thursday afternoon by EPA Administrator Lisa P. Jackson, is expected to end or significantly cut the use of “valley fills.” At these sites, mining companies fill valleys to the brim with rock and rubble left over when peaks are sheared off to reach coal seams inside.

“Minimizing the number of valley fills is a very, very key factor,” Jackson said. “You’re talking about no, or very few, valley fills that are going to meet this standard.“

Of course, without “valley fills,” it’s going to be pretty difficult to blow the top off a mountain and figure out what to do with the resulting debris. Over at Gristmill, they quote “95-year-old Ken Hechler, the former West Virginia congressman who introduced the first bill in Congress to stop mountaintop removal and strip-mining in 1971,” calling this “a great victory for the Clean Water Act and justice.”

Maybe, but as J.W. Randolph of Appalachian Voices points out, we still need “Congress to follow the Obama administration’s lead by passing legislation that will permanently protect our homes and communities from mining waste…Change in Appalachia is now inevitable, and the time for Congress to pass this legislation is now!”

By the way, for anyone who argues about the supposed economic importance of mountaintop removal mining, I strongly recommend that they read this letter, by Justin Maxson,  president of the Mountain Association for Community Economic Development.  As Maxson points out, “coal mining jobs amount to only about 2 percent of employment in the central Appalachian region; the percentage is only slightly higher if you consider related employment.”  The problem with “mountaintop removal” mining, of course, is that it’s a highly capital-intensive (explosives, heavy machinery), not labor-intensive (miners) process. The other problem is the nature of the coal industry, which Jim Webb explains extremely well in Born Fighting.

The people from the outside showed up [in Appalachian coal country] with complicated contracts…asking for “rights” to mineral deposits they could not see, and soon they were treated to a sundering of their own earth as the mining companies ripped apart their way of life, so that after a time the only option was to go down into the hole and bring the Man his coal, or starve. The Man got his coal, and the profits it brought when he shipped it out. They got their wages, black lung, and the desecration of their land…Coal made this part of Appalachia a poverty-stricken basket case while the rest of the mountain region remained mired in isolation.

That pretty much sums it up.