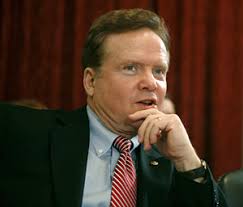 I received this information in an email from Sen. Jim Webb’s office: Sen. Webb plans to reintroduce his Taxpayer Fairness Act as an amendment to the financial reform bill, S. 3217, when it comes up for debate.

“During this debate on financial regulation, nothing seems more fair or appropriate than to make the American taxpayers whole after they infused our financial markets with capital in 2008 and saw them to recovery,” said Webb.

Sen. Webb and Sen. Barbara Boxer (D-CA)  first introduced their idea of a one-time tax on bonuses as an amendment to the bill passed in March which extended certain tax provisions. The amendment stated that there should be a one-time windfall tax on bonuses paid in 2010 to executives of financial institutions that received $5 billion or more from the TARP program.

According to the Congressional Budget Office, the amendment would raise at least $3.5 billion. The proposal would assess a 50 percent tax this tax year on bonuses above $400,000. Any money raised will be returned to the Treasury to reduce the budget deficit. Sen. Webb stated that he does not favor any sort of recurring tax on bonuses for executives in the financial sector.

“Our political leaders should have the fortitude to require that excessive bonuses from these companies be repaid to the American people,” Sen. Webb said. “It is a targeted, sensible approach to ensure that the taxpayers who made possible the success of the biggest financial institutions benefit from that success – not just the executives of those institutions.”

Jim Webb and Barbara Boxer have contended that the TARP program, along with actions by the Federal Reserve, mitigated risks to the largest banks and financial houses. “These executives got lucky, to the exact degree that our middle-class taxpayers got the shaft,” Sen. Webb said.

There are even financial analysts who agree with the Boxer-Webb amendment. Sen. Webb quoted Martin Wolf of the Financial Times, who said in November of 2009: “Public finances will be devastated for decades: taxes will be higher and public spending lower.  Meanwhile, bankers are about to reap huge rewards. This damages the legitimacy of the market economy…’Windfall’ support should be matched by windfall taxes.”

I say “Amen” to that. However, I believe this amendment, which should pass with bipartisan support, may well fall short of 51 votes. We can expect the 41 Republicans to vote against it. We can add in some of the conservative Democrats. It’s still worth the effort, though.

(Update: The GOP must be doing some polling that shows just how dumb their refusal to allow financial reform to come up for debate actually is. They now have said they will drop their “filibuster” against S. 3217.)