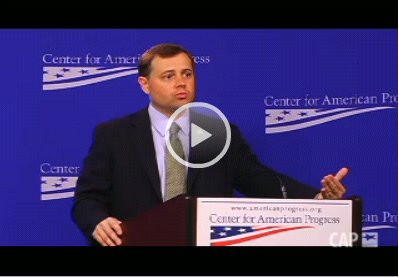 I attended this event at the Center for American Progress yesterday. The featured speaker, starting at about 2:45, was Rep. Tom Perriello (D-5th, VA).  I’ve listed a few key points, after the “flip.” Overall, excellent job – thoughtful, articulate, nuanced, wise – by Tom Perriello on an important topic, and yet another example of why he richly deserves to be reelected this November!

*”Being tough means doing your homework”

*Opposition movements in Iran are growing, but the outcome of their efforts is “not inevitable”;

*In addition to sanctions and military force against Iran, both of which remain “on the table,” we need to look at creative solutions we haven’t thought of yet; what is the “option set” where we can “maximize the upsides and minimize the downsides?”

*The nuclear issue is “very serious” and playing out rapidly; strategies that talk about 20- or 30-year culture change are not really ones that will meet the context of how Washington is thinking about the problem.

*We need to think about what we can we all do, with legitimacy, to support the courageous Iranian opposition movement and move towards “regime transition” in Iran sooner rather than later.

*We need more “open source,” Iranian voices rather than just information seen as produced in the US or UK.

*The tendency of Congress on foreign policy issues is to write a hawkish, non-binding resolution that accomplishes “little or nothing,” but everyone votes for it and feels “tough on national security.”

*There is, however, “genuine interest” in Congress in supporting Iranian democratic activity, eliminating development of nuclear weapons, doing something about human rights abuses.

*There’s “some hunger for new ideas,” but we are in a “hyperpartisan environment right now.”

*”Anything that seems less than a march to war will be something that those who are on the other side can take and try to make a political issue out of.”

*”There is, even among the most hard right and hard left, some understanding that sending in support with a big American flag on it doesn’t exactly help the opposition movement on the ground.”