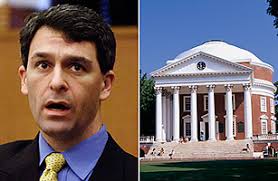 While Virginia Attorney General Ken “Cooch” Cuccinelli wastes his office’s time and money on frivolous lawsuits against the federal government, appearances at Tea Party events, appearances at gun rallies, appearances on a panel a “faith healer,” etc., etc., here’s the type of thing he should be paying attention to.

Priorities, priorities, I guess, not that this has anything to do with Cooch’s (non)allocation of time and resources.

So, I’ve been asking around to our elected officials regarding what Cooch can and should be doing about Richmond-based Massey Energy, as well as about its Tazewell, Virginia mine. Here’s what they had to say.

“There’s a lot the Attorney General can do to make sure inspectors are ensuring compliance for laws related to mine safety and that bad actors in the market are punished. In addition, Commonwealth Attorneys are charged with prosecuting violations of the coal mine safety laws of Virginia.”

“Attorney General Cuccinelli certainly has the power to look at Virginia-based companies’ safety records within Virginia. Depending on where the safety violations take place, that will determine what course of action the Attorney General takes. There’s no doubt that the AG has the power of the ‘bully pulpit’ to speak out about companies like Massey. That’s precisely what the AG should be doing.”

“[I]f an activist AG can go after the EPA and Health Care Reform, he could go after Massey.”

“The short answer: if there’s the political will to go after the Federal government…it’s certainly sounder reasoning to go after Massey than the federal government on healthcare reform. The Virginia AG has a fair amount of latitude and discretion to enforce environmental laws. If there are violations in the state of Virginia, the AG could definitely act.”

[E]very AG can decide if he wants to be more proactive and come up with creative ways to make himself relevant (as we already saw with Ken Cuccinelli and the gays memo, EPA and healthcare lawsuits, etc). I’m sure he can point to some specific statutory authorities that allowed him to intervene in these areas or at least make a colorable assertion that he has jurisdiction to take such actions.

Likewise, I have to assume there are some provisions of existing VA law that would give him the “hook” he needs to bring some sort of enforcement action against Massey, if he’s willing to be creative enough.  Or maybe someone can find such jurisdictions for him and suggest that he bring a suit using that statutory authority against Massey.  The existing statutes don’t necessarily have to be criminal.  They can be civil with enforcement penalties.

I’d look at consumer protection or environmental/safety regulatory laws to start.  I’d also look at federal environmental or mine safety laws to see if they provide for state enforcement as dual jurisdiction in addition to federal penalties.  Or maybe there are private rights of action created under federal law, in which case a VA constituent could ask the VA AG to intervene in his private lawsuit as a party of interest.

In short, the Virginia Attorney General has the power — certainly if he has the will and the creativity to use that power — at the minimum to speak out about and/or investigate Virginia-based Massey Energy for safety violations occurring within the borders of Virginia (such as at the Tazewell mine). The question is, why isn’t Cooch doing that?  As noted above, he certainly has plenty of spare time on his hands, so that’s not an excuse. Hey, for another “$350”, maybe Cooch could have his staff spend a few hours and look into Massey, preferably before a disaster like the one that took place in West Virginia occurs here in Virginia? Just a thought…

UPDATE: Great comment by Gretchen Laskas regarding Republican attacks on those who call for action against Massey. “The only people who think anyone is ‘capitalizing’ on the deaths of miners are people who wish those fighting for mine safety would just shut up.” So true.