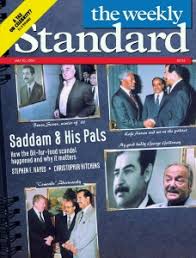 Although Bob McDonnell likes to pretend that criticism of his constant missteps are all the fault of “political attacks by Democrats” or the “liberal media” or whatever, that’s simply not the case. The fact is, criticism of McDonnell is also coming from conservatives, like this article at the Weekly Standard.

The proclamation was quite a remarkable unforced error from a political team that doesn’t usually make even small mistakes (at least, on the campaign). The hows and whys of the proclamation’s writing are still unclear, but a McDonnell aide suggested it had been written quickly.

I was saddened by it. I don’t believe McDonnell is racist or that this mistake makes him one, but the proclamation was insensitive. I spend some of my time-too much now that many in the media have decided everyone within a mile of a Tea Party is racist- defending innocent Republicans and Southerners of all stripes from unfair racism allegations. This made that job harder.

Exactly right. There’s no evidence to suggest that Bob McDonnell is a racist, but McDonnell’s proclamation – which, I’d point out, has not been changed to something more neutral like “Civil War History Month” – was incredibly insensitive and divisive. So says the Weekly Standard, not the “liberal media,” although Bob McDonnell and his rabid defenders in the blogosphere would like to pretend that’s the case.

.@RepMcEachin - "I applaud President Biden for his swift action to revoke the unconstitutional and discriminatory transgender military ban and ensure that any qualified patriot is able to serve their country in uniform." https://bluevirginia.us/2021/01/monday-news-renewables-chief-hails-crucial-biden-climate-agenda-lawmakers-threatened-ahead-of-impeachment-trial-fauci-on-what-working-for-trump-was-really-like-tim-ka#comment-5241412930

As usual, @MarkObenshain's not arguing in good faith. In fact, the only reason "people" don't have "confidence" in the elections system is because of Republican politicians spewing out lies about mythical "voter fraud," etc. https://bluevirginia.us/2021/01/monday-news-renewables-chief-hails-crucial-biden-climate-agenda-lawmakers-threatened-ahead-of-impeachment-trial-fauci-on-what-working-for-trump-was-really-like-tim-ka#comment-5241342642 h/t @vaplan2018