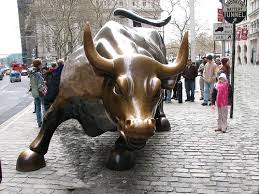 It has been nearly three years since the collapse of Lehman Brothers, and the related malfeasance of Lehman and other Wall Street firms.   Hank Paulson has admitted Lehman’s balance sheet was bogus.  According to Robert Reich, Goldman Sacks helped Greece hide its public debt and then bet against it with credit default swaps, those risky derivatives, in the news so much in 2007-2009, to avoid risking its own capital.  If you think the scenario is familiar, think AIG.  By any stretch of the imagination, these overpaid and overfed hacks and flacks should have been left to suffer the consequences, stripped of their wealth and in prison.  Why hasn’t this happened?  We have waited and waited for economic reform we can believe in, which Wall Streeters are fighting tooth and nail.  We’ve been told that we can’t have the meaningful reform we crave, that we must accept “bipartisan” compromise.  The GOP slings its empty “free market” bull (bull, because they never actually mean a free market, but rather a rigged market, in practice). Then they blame an administration inheriting the effects of their party’s utter lack of fiscal stewardship.  Now they fight reform to fix it and assure proposed re-regulation is toothless.  And of course, it’s everyone’s fault but their own.  The faux-helpless foxes at the SEC guarded the hen house then.  Even our own side has acted fairly helpless in the face of so many misdeeds. Should the administration not use the tools and methods available to it, it will deserve later scrutiny and judgment.  I reserve judgment for the time being. However, as Reich observes, it turns out that we do not need “reform” to do something about it.

The oft-forgotten Sarbanes-Oxley (2002) bill was designed just for such an occasion, says Robert Reich.  In his article entitled “Fraud on the Street,” Robert Reich points out what many inside (and outside) of government  won’t admit to you.  To wit:

Sarbox is directly relevant to the off-the-balance-sheet derivative games Wall Street has been playing. No bank CEO can faithfully attest to the accuracy and completeness of its financial reports when derivatives guarantee that the reports are incomplete and deceptive.

This statement appears in the newest issue of The American Prospect.  For those who do not have the magazine, here is the link. Why didn’t they ( our administration and our Congressional leaders) think of that?  Sarbanes-Oxley can bring fraudulent Wall Streeters to justice. In an adaptation of his original article, Reich also makes his case for current law’s power to bring economic justice to those whose “apologies are cheap” (and very, very late).  You can read the adaption at Huffington Post.

I do not suggest that Sarbanes-Oxley is all the reform we need.  But it is a start.  Reich raises a legitimate point, which we in the progressive media should drive home.  Why shouldn’t the administration bring economic justice by holding the culprits accountable?  But more to the point, why didn’t they think of that?