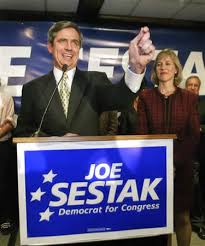 Please use this as an open thread to discuss tonight’s elections.  Daily Kos recommends the following sources for results, and I see no reason to argue.

So far, in Kentucky, it looks like wingnut/tea partier Rand Paul has crushed Mitch McConnell’s favored Republican candidate, Trey Grayson. All I have to say to that is, “hahahahahahaha.” 🙂

In the Kentucky Democratic primary, it looks like the better Democrat, Jack Conway, is defeating Daniel Mongiardo.  Also good news.

UPDATE 9:52 pm: Dave Wasserman of the Cook Political Report tweets, “#PASEN running down the list county-by-county, it’s becoming clearer and clearer Specter has no hope of pulling this out.”  Also, in other good news, “#PA12 So far Critz winning 52-43% in Burns’s home base of Washington Co. Not encouraging for @nrcc so far.”

UPDATE 10:03 pm: Kos tweets, “Knock on wood, but it’s looking like a great night for Dems. The intensity gap may be history.” Let’s hope! Also, Dave Wasserman tweets, “#PA12 @dccc does it again? Critz could end up winning by a substantial margin.”

UPDATE 10:08 pm: It looks like Sestak is going to be the Democratic nominee for U.S. Senate from Pennsylvania. Right now, he’s leading 53.3%-46.7% and his lead is growing, with 61% of precincts reporting. Also, Democratic turnout in PA is far higher – about 200,000 votes – than Republican turnout. This is turning into a great night for the “blue team!”

UPDATE 10:17 pm: Critz won easily, Sestak beat Specter, Conway beat Mongiardo, not sure about Blanche Lincoln vs. Bill Halter yet. All in all, a superb night for the Democrats.  I’m going to bed with a smile on my face!

UPDATE Wednesday morning: Halter-Lincoln headed for a recount. A major victory for Dem’s in PA-12, and a major defeat for the worthless NRCC and its vile, gay-bashing spokesman, Andy Sere.

UPDATE #2 Wednesday morning:  This will make you laugh!

UPDATE: The ad that destroyed Arlen Specter, showing him to be completely fake, inauthentic, self-serving, snide, slimy, pretty much everything people don’t like in politicians. Utterly devastating.

.@QasimRashid: “At an NAACP rally on Saturday, I met a Trump supporter who accused Democrats of forcing socialism on America b/c we believe healthcare is a human right” (Here's what happened.) https://bluevirginia.us/2020/10/qasim-rashid-at-an-naacp-rally-on-saturday-i-met-a-trump-supporter-who-accused-democrats-of-forcing-socialism-on-america-b-c-we-believe-healthcare-is-a-human-right