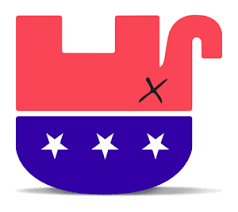 I just got through tweeting this morning that it’s “Another day 4 Repubs to ridiculously blame problems (of the US and the world) rooted in Bushco on Obama. & claim they “kept us safe.” 😉 ”  And, sure enough, here we go…

With great fanfare,  they rolled out their effort to take back Congress this year and the White House in 2012. It was to begin with town halls all over the country, with the usual tired cast of characters (John McCain, Sarah Palin and others).  Michael Steele seemed to shoot himself in the foot every time he had the chance. And one GOP elected after another just made stuff up, bragged about obstruction, and inflamed the so-called Tea Party fringe.

Now comes word from Huffington Post that the GOP has suspended its “rebranding effort”!  This is a major defeat for Eric Cantor, who has a knack for playing stupid.  (Again, how exactly did he get his law degree?)


Cantor’s office told CQ the “relentless attacks from the left” were to blame, but most high-profile criticisms of the effort to make Republicans seem more moderate came from figures within the party itself — Rush Limbaugh, Michael Steele and Mike Huckabee, among others — and the Republican base.

BWAHAHAHAHAH!  As usual Dems are “to blame,” for everything, even what the GOP messed up during its own rule.  Now we are responsible for running/ruining THEIR party too?

You  would think that the supposed “accountability” folks could just once admit their own stupidity, incompetence at running the country, and failure to behave in a constructive manner even a single time since January 2009. There is no excuse for their infantile behavior.  Yet they continue play-acting (like the legislature of California) that the lives they toy with and crush are trivial. Let the real grownups step forward and cooperate in running this great nation and the clowns and misanthropes go home.

If it were our fault that they failed, I’d be proud of that fact. But it isn’t.  And the GOP looks more ridiculous than ever pretending it is so.