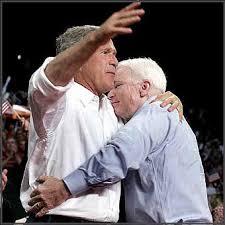 I wholeheartedly agree with libertarian Doug Mataconis on this subject.

Only hours after Faisal Shahzad was taken in to custody at Kennedy Airport, John McCain was on the air suggesting we deny him his civil liberties.

That sound you hear is the Constitution of the United States being run through a shredder.

Remember, the suspect in this case is an American citizen. As one commenter at Doug’s blog writes:

So let’s see if I’ve got this right:

-If you’re not a citizen, you have no rights.

–If you’re a citizen, you have rights, but only when the government says you do.

Apparently, this is the Republican vision for America. That, and witch hunts against scientists. Scary.