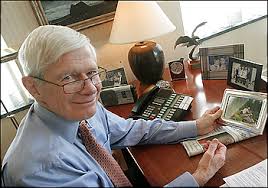 Apparently, the DPVA has decided to abdicate its responsibility for responding to Republican craziness, defining a narrative, doing its job, etc. Fortunately, we’ve got Sen. Donald McEachin, one of the best and brightest in the General Assembly, on the case, calling out Bob McDonnell and Ken Kookinelli whenever they do something heinous. Sad to say, these people are so crazy, McEachin can hardly keep up. Still, he’s doing what he can, with very little help (if any) from DPVA.

Richmond – Senator A. Donald McEachin today expressed his very strong reservations about Fred Malek chairing Governor McDonnell’s Government Efficiency Commission. Senator McEachin stated, “While recognizing and sharing the concerns of my colleagues about Mr. Malek’s troubling past regarding discrimination, I am more dismayed and disturbed by Mr. Malek’s recent illegal behavior. In light of his recent unlawful activity, Mr. Malek is the wrong person, especially for this position which involves government monies and operations. Just a few short years ago, Mr. Malek was forced to pay a personal fine of $100,000 for violations of the Securities and Exchange Act while his company paid an additional $150,000.  In these turbulent times, in which people have legitimate concerns about government and government monies, Fred Malek is the wrong man, wrong commission, wrong time.

I call on Governor McDonnell to replace Mr. Malek to restore Virginians’ faith in this important endeavor so they can be confident that it will be an honest, credible process, executed with integrity.  As long as Fred Malek is chair, with his questionable recent behaviors, everything this commission does will be clouded with doubts and concerns.

For more on Malek and the defrauding of Connecticut state pension funds of $75 million, see here.

P.S. If you like the great work Sen. McEachin is doing – not to mention his crucial support for Jim Webb in early 2006 – you can support his reelection here. Thanks.