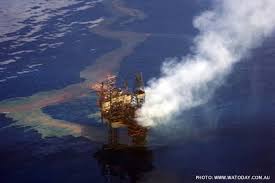 I don’t know much about this polling outfit, but the results are intriguing.

PUBLIC SUPPORT for offshore drilling in Virginia has dropped significantly in the wake of the Gulf Coast oil spill disaster, an Inside Business poll has found.

In April, research firm Issues and Answers Inc. polled 200 people, who were asked, “Do you support the opening of the East Coast, specifically Virginia’s coastline, to offshore drilling?”

On May 2, another 200 people were polled and asked the same question.

“It’s not surprising at all, given what’s going on in the Gulf of Mexico,” said Sen. Frank Wagner, R-Virginia Beach, a big proponent of off-shore oil drilling…”

Well no, Sen. Wagner, these shouldn’t be surprising poll results, “given what’s going on in the Gulf of Mexico.” The question is whether this apparent decline in support for oil drilling off Virginia’s coast continues, or if it rebounds once the Gulf of Mexico disaster is history. Of course, given the ecological and economic damage it looks like the Gulf oil spill could cause, it could be many years before it’s truly “history.”