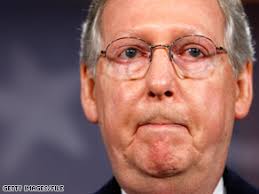 Today, Kentucky Republicans selected Rand Paul as their Senate nominee, handing Senate Minority Leader Mitch McConnell a stunning loss. In a show of weakness for the Minority Leader, and in a race that symbolized the fight over the heart and soul of the Republican Party, Rand Paul overcame McConnell’s handpicked candidate by a large margin. Unfortunately for Republicans, ordinary Americans are unlikely to be receptive to extreme candidates like Rand Paul in the general election this November.

Rand Paul’s positions fail to resonate beyond the far-right Republican segment of the electorate that supported him tonight. Middle-class Kentucky voters want to elect a Senator with clear ideas about how to create jobs and opportunities for Kentucky families. But Rand Paul is more interested in talking about abolishing the Department of Education and disbanding the Federal Reserve than about supporting economic recovery.

As a result, Democrats are now in a better position to win Kentucky’s open Senate seat.

Let’s hope Tim Kaine is right about this. For now, I’m just enjoying watching Mitch McConnell get his butt kicked. Couldn’t have happened to a nicer guy.

P.S. This should play really well among Kentucky voters this fall.

UPDATE: After the “flip,” check out the analysis I received from a politically astute friend via email.

I finally got home last night after 10 from work…and read the primary results.  My first impression was not too bad at all.  In particular, I pointed out to my wife that Kentucky might be the sleeper and happy surprise for Dems.

Bearing this in mind, I was still a bit surprised Saturday before last when I found myself sitting in Pikeville [Kentucky]…for a medical school graduation and got to gauge the crowd’s reaction to the guest speaker – Mitch McConnell.

Their reception was cool, even rude at times.  A lot of little things, such as less than half of the crowd acknowledging McConnell when introduced and even less standing…There was a lot of this but it still came down to the basic fact that the folks simply did not like McConnell.  It was that noticeable.

I won’t bore you with some of the history of races in Kentucky, but Republican stock is not nearly as high as the national media would make it. To put this in perspective for this year’s race, Rand Paul is nuts like his daddy and Dems aren’t out of the running.

Paul will pull traditional Rep areas and probably fairly decisively.  Conway just ran a statewide race, although downticket, and knows how to run statewide.  McConnell may or may not jump in to help Paul and may even be rebuffed by Paul.  It will be mainly a retail politics election but there will be a lot going on in the traditional mode of politics.