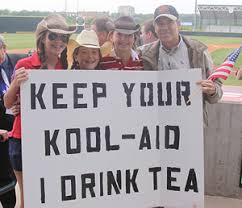 We are in for a few rough election cycles as the Tea Party’s rightwing populism burns through the electorate. Cynical outside observers have spied a certain irony, or, if you prefer, hypocrisy, in “the movement” because so much of its funding appears to be flowing through subterranean channels from the well-stuffed coffers of mega-corporations and other Big Money citadels.

Even if you follow the money, there is, however, a genuine underpinning of honest anger among the TP foot soldiers against what they see as bloated government that answers to greedy and cruel big business, which has put our grandchildren in hock with its huge budget deficits—– a cause that also acts as a cover for both middle-aged white fear of loss of power in an increasingly diverse electorate, and covert racism, as explained in

The same outside observers maintain, I believe with some reason, that Big Business interests have co-opted the Tea Party for their own purposes, with the intent of furthering the transition to a corporate feudalism which will keep the facade of a democratic republic while true political power resides with global corporate interests. A current example of corporate power has been on display with the Big Bank bailouts, dilution of re-regulation efforts, and even the arrogance of BP in the Gulf, ignoring EPA directives on use of dispersants, and preventing full on-the-ground coverage by press and other media of the Deepwater oil spill catastrophe.

Alas, Tea Party, you are doomed. Yes, you are probably more than a flash in the pan, but still doomed as a long-term successful political movement, and not because of anything or everything you will do over the coming months, or what your Democratic opponents might screw up their courage to do, either.

The reason your movement will finally fall to the wayside is that you are mired in the past, and the future is roaring down on you, inevitably, inexorably, and quite beyond your power to manage.

Everything about the Tea Party hinges on “restoration,” a turn backward to what they have chosen to define as “the original Constitution,” an infallible document crafted by our all-wise Founding Fathers. They mean the Constitution as strictly interpreted in conformity with their personal idea of what was meant by each and every word. That turns out to mean they are big on states’ rights, a severely limited national government, a social system favoring the originators of the Revolution (i.e., whites, especially males), and a  political system catering to business or what they call free enterprise. It is all about turning back the clock to a mythical period of time that conforms to their comfort level—- as encouraged, of course, by big business interests, which chafe under regulation by an uppity federal government that has sometimes proved hard to control, interests which have very different objectives from the stated goals of the Tea Party.

The World Future Society, a 40-year old organization of futurists, says in a special report,

“It’s as if we’re driving 200 miles an hour and only looking into the rear-view mirror.”

That is a perfect description of the Tea Party, whose members have been heard to say “I don’t like change.” Too bad, TP, life is change. In the 21st century, we are dealing with hyper-change, and the most valuable skill required is foresight…. a skill completely unavailable if you are looking in a rear-view mirror.

The Society has been remarkably successful over the past 40 years in forecasting major technological and social developments—- not the details, but the broad-brush trends, from the 1970’s energy crisis to increasing terrorist attacks on US soil, even mentioning the World Trade Center as a likely target, as well as human organ transplants, genetic engineering, new communications technologies, and  telecommuting, among other developments. There are at least 17 trends and breakthroughs that have significant entrepreneurial significance, spotted by them just for the time frame of 2011 through 2025:

1- Water will become the new oil (I say the American Southwest is already desperate for water, and the wars of the 21st century will more likely be over access to water, than oil); use of desalinization will grow

3- By 2025 world-wide life span will increase one year per year; only 15 percent of deaths will be due to naturally occurring infectious diseases Think what this will mean: vast aging populations, for example)

4- There will be a race for genetic enhancements comparable to the space race in the 20th century; this includes nano- and bio-technologies unimaginable just a few years ago, including boosted intelligence

5- Bioviolence will be a greater threat; previously cutting-edge technologies will be readily available to almost anyone, including nuts and fanatics

6- Artificial intelligence as early as 2023 will enable computers to learn and think, for example to help a car navigate through traffic or diagnose complex illnesses

7- Algae will have a huge potential as a biofuel, especially for transportation; it can produce 5,000 gallons of fuel per acre, meeting 30-60 percent of US oil needs at perhaps $30 a barrel, by 2020

8- Invention will become automated as inventors write descriptions of the problems to be solved, and turn the descriptions over to computers, enabling non-technical people to become inventors

12- Electric cars will become fully practical by 2020, which will also help to “neutralize petrodollar power”

13- The Millennial Generation will become the next “Great Generation” because they have a strong entrepreneurial bent, preferring to run their own small business than work for a mega-corporation

14- Quantum computers will revolutionize information around 2021, completing in seconds tasks that silicon computers would need billions of years to accomplish (we have seen algorithms on computers already creating unusual volatility in stock markets, beyond present regulations to control, think what it will be with qubits)

15- Solar energy output could double, thanks to advances in photovoltaics, making solar electricity much more competitive, perhaps within just 3 years

16- Genetic research may soon conquer most inherited diseases, as personal DNA can be replaced or even over-written

17- Virtual education will be mainstream by 2015, especially in corporate training

Not one of these trends can be accommodated within the current Tea Party dogma. What, for example, would their religious quadrant make of #16, meddling with God’s creation? They can frustrate and delay America’s participation in this wave of the future, by, perhaps, preventing federal subsidies that encourage such developments as using algae as a biofuel, while the rest of the world charges ahead.  This can make the US less competitive, turning us into a backwater, a 21st century version of a third world country.

I believe it far more likely that the Tea Party, after a brief and riotous turn in the sun, will be overtaken by events. These trends, and others, will simply ride right over the Tea Party, making them supremely irrelevant. As the Millennials come into power (see #13), they will reject the retro TP and the Republican Party itself as presently constituted. They may even, of course, reject the Democratic Party if it fails to carpe diem and cast itself as the enabler of the future, not its opponent.

Oddly enough, the Islamic jihadists are in the same boat as the Tea Party: they reject the future, have their eyes fastened on a mythical ideal, and are equally mired in the past (just a slightly different past than that of the Tea Party Republicans). They, too, will largely be unable to hold back the future and, where they do rule for a time, their subjects will be completely left behind and will, eventually, dispose of them.