(UPDATE: The Shad Plank has the video, and says, “it’s still unclear why Palin wouldn’t want sympathetic ears and eyes to land on the speech.” – promoted by lowkell) 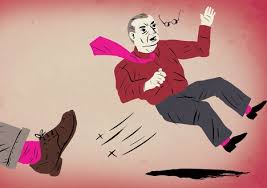 Gotta love it, a conservative blogger attempts to “live blog” the Sarah Palin event – ironically entitled “Freedom Fest” – in Norfolk and is booted out for his exercise of 1st amendment rights audacity!  Having been duly booted, said conservative blogger missed a star-studded lineup of “patriots” including:

Anyway, the boys at Bearing Drift were well into their coverage of the event — with J.R. Hoeft commenting, “This is really a much more Pro-GOP rally than I thought. Not quite sure how I feel about it.” — when hilarity ensued.

J.R. Hoeft: We’re being kicked out. So much for transparency.

Whoops, so much for “standing strong for freedom” (at an event ironically entitled “Freedom Fest”) and all that!  Freedom of speech? First amendment rights at an event with a lineup of public figures?

Apparently, Palin, North, “Felix Macacawitz” et al. aren’t clear on that concept. Seriously, if these people are afraid of a conservative, pro-Republican blogger, what does that say about the confidence they have in their belief system and ability to express it?  Or is this about a bunch of control freaks carefully controlling their message and public image from the rabble public they pretend to “serve?”  And yes, they can make whatever rules they want at their own event, but again, these are public figures, elected officials, former elected officials, and future candidates for high office.  Why are they so concerned about the public – let alone a conservative, pro-Republican blogger – “live blogging” their event? What are these chest-thumping blowhards so afraid of, anyway?

Video: On MSNBC, VA Del. Danica Roem Says “This is an all hands on deck, we have to win everywhere, at every level of...