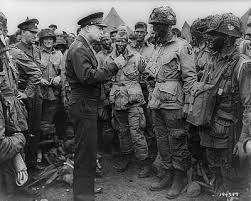 It’s hard to believe that 66 years ago today the largest armada in history assaulted the hostile shore of Festung Europa of Nazi Germany….. The Longest Day, which I remember (as I said elsewhere in a diary on BlueCommonwealth) because my father, an infantry battalion commander with the 1st Division, was there on Omaha Beach, while I was taking finals in school in upstate New York.

What strikes me today is how we are individually positioned in time, how we think or feel about events that are on our horizon because we lived through them, or over our horizon beyond our personal experience, but perhaps within the experience of someone we know, or simply way beyond everyone’s mental horizon, i.e., “history.” How we think of an event, or even if we think of it at all, has a lot to do with how we conduct our lives, how we vote, what our cultural tags are, and what we want to preserve, or what kind of change we can believe in. In short, what kind of a generation gap must we deal with?

Death is the source of all progress.

So I believe: given human nature we as individuals generally resist changing our ways. Had not the old cavemen died out, we would probably still reside in caves (“It was good enough for Grandad, it’s good enough for me” and “We’ve always done it this way”).Change usually means we are going to lose something that made us comfortable, like a privilege or a position we held and maybe did not even know we enjoyed until it was about to be taken from us. Change is therefore a threat.  When, even as a problem grows into the need for a change and it is barreling down on us, the comfortable thing to do is to ignore the problem. On the other hand, at some point in pre-history, some members of homo sapiens did not ignore real problems, they adapted to climate change and other threats, developed a bigger brain to cope, and made changes so the race survived.

Successive individuals and their societies, by coping with one difficulty after another brought us to our present condition. Different societies have different capacities for producing individuals who can create whatever change is necessary for their group to survive.  A social system which is too rigid and refuses to adapt will finally fail; its people and its culture, bravely pure and blindly unchanged, will die out: Gone forever. More flexible and more adaptable societies change, survive, and grow. True, they may no longer look quite like their original template, but they survived. Time is relentless, change is inevitable, there are no exceptions, nor any teacher’s pets that are given the answers in advance of the test.

That is my beef with the reactionary Tea Party-Republicans. You can’t go home to a (mythical) Eden. When I hear them say that they want to go back to the original Constitution as our Forefathers intended, I doubt they really know what the Forefathers had in mind since that era is beyond our personal horizons, but I am quite sure that those Forefathers were coping with their problems, not ours, and that we are actually fortunate they gave us such a fine, flexible document based on mission-type orders, not a detailed schematic which pretended to foresee every modern nuance. Not only that, the Constitution itself had directions for amending it, which tells me those sainted Forefathers actually expected change. Maybe even change ad infinitum.

Then there are those disgruntled middle-aged and older white men who have told me the best time was the 1950’s when everything was just right. I am incredulous.  I lived through the 1950’s, did those disgruntled guys and I live on the same planet? My version of the 1950’s: Dear little neurotic wifey chained to her kitchen, maybe not always barefoot and pregnant but knowing that was really her place, lynchings of minorities, polio epidemics, the sociopathic male careerist in the grey flannel suit, frustrated serfs of The System (Death of Salesman, anyone?), a grinding ground war in Korea…… ye gods, my mental horizon must not be the same as theirs.

Think of the chain of linked historical mental horizons: To today’s youth, World War II is as remote as the Spanish-American War was to me—- “knowable” only if one happened to talk to a veteran. Those who fought in the Civil War may very well have known someone who was around during the American Revolution (Robert E. Lee’s father was Light Horse Harry Lee of Revolutionary fame). The Civil War and Reconstruction were occasionally part of my family’s table talk, it still seemed close and therefore relevant to me.

Do today’s children have the same sense of the Great Depression as I did for the Civil War, or even World War I and the Spanish flu? It does not seem so.  The moral fiber and the characteristic approach to the results of this era’s Wall Street meltdown compared to the 1929-40 economic disaster are very different, to me at least. The one thing I am absolutely sure about, though, is that the way to deal with all our problems, perceived and unperceived, is not to be rigid or determined to prevent change. That way is the way of failed societies.  That way lies defeat and death.