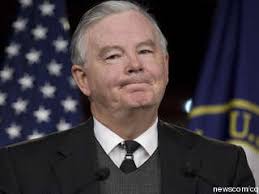 It is yet another big week for clean energy. The President is having a group of bipartisan senators over to discuss how to get a clean energy bill moving that addresses the source of the gulf spill. One guy who won't be attending is Congressman Joe Barton (R-TX) after he apologized to BP CEO Tony Hayward for the “tragic” mistreatment his company has suffered. Here are Barton's now infamous words:

“I'm ashamed of what happened in the White House yesterday. I think it is a tragedy of the first proportion that a private corporation can be subjected to what I would characterize as a shakedown, in this case, a $20 billion shakedown.”

That's right, forcing BP to pay for the damages it has caused is not justice, it's a “shakedown.” Incredible.

In response, numerous lawmakers from both parties expressed strong disgust at his comments. Unfortunately, that irritation didn't extend to everyone as a few seemed to share Barton's perverse perspective, in which BP is the victim and the rest of us are the perpetrators. Or something.

For instance, Representative Michele Bachmann (R-MN) called the $20 billion escrow account a “redistribution of wealth fund.” That's right, according to Bachmann, forcing BP to pay for the damages it caused is some sort of socialist scheme. As for the tens of thousands of Gulf Coast residents who depend on fisheries and tourism for their livelihoods? In Bachmann's world, apparently, they deserve nothing. “Let them eat cake,” perhaps?

Meanwhile, Senator James Inhofe (R-OK) and his Big Oil buddies continued to block legislation aimed at eliminating the $75 million liability cap on BP for economic damages stemming from the oil disaster that it caused. Apparently, protecting the mega-profits of a giant oil company is priority #1 for Inhofe et al, even as tends of thousands of Gulf Coast residents see their lives and livelihoods crumbling around them. Priorities, priorities, I guess.

Look, I am all for open markets and free enterprise. But, in addition to the chance to make enormous profits, doesn't doing business in a responsible manner also entail owning up to your obligations, not to mention your egregious mistakes? I mean, if I run up a bill on my credit card, I have to pay it. If I walk into a store and start smashing up the merchandise, the “Pottery Barn rule” is highly likely to kick in – “you break it, you buy it.” In fact, I would go so far as to call this a basic principle of doing business. In Senator Barton's world, in contrast, the “Pottery Barn rule” only applies to the “small people,” not to multibillion-dollar corporations like BP.

In the face of this heart-breaking and rage-inducing catastrophe, we don't need business-as-usual from Big Oil Barton and Company. Instead, we need something bold and transformational. We need comprehensive clean energy and climate legislation that will break our addiction to oil, transform our economy, enhance our national security, and guarantee that oil disasters like this one never happen again.

Fortunately, even as a few lawmakers are busy apologizing to BP, others are hard at work trying to put America on a safer, cleaner path. Last week, Democratic senators held a caucus meeting on clean energy and climate legislation, and tomorrow they will hold another one. President Obama's get-together is Thursday. These gatherings are important, as they will help determine the Senate's path forward.

I am hoping that the meetings don't yield anymore ridiculous quotes a la Barton or Bachmann. My fingers will be crossed that after all the lawmakers have had a chance to be heard, they will move beyond rhetoric and lay out their plans for passing comprehensive, clean energy and climate legislation this summer. Because action is what we need now from our elected representatives. If they fail to take that action, they will owe us all an apology.