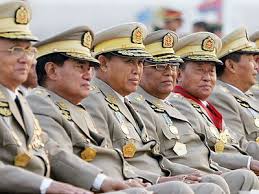 From Senator Webb’s office, the following press release was issued after Webb had concluded visits to Thailand and South Korea. Burma, of course, is one of the most corrupt, repressive regimes in the world. The thought of the Burmese military junta in possession of nuclear weapons is not a pleasant one.

News reports published today contain new allegations regarding the possibility that the Burmese government has been working in conjunction with North Korea in order to develop a nuclear program.  From the initial accounts, a defecting officer from the Burmese military claims direct knowledge of such plans, and reportedly has furnished documents to corroborate his claims.

It is unclear whether these allegations have substantive merit.  However, given the fact that Assistant Secretary of State Kurt Campbell recently accused Burma of violating UN Security Council Resolution 1874 with respect to a suspected shipment of arms from North Korea, there are now two unresolved matters related to activities of serious concern between these two countries.  Until there is further clarification on these matters, I believe it would be unwise and potentially counterproductive for me to visit Burma.

I strongly believe that a continuation of dialogue between our two countries is important for the evolution of a more open governmental system and for the future strategic balance in Southeast Asia.  However, a productive dialogue will be achievable only when these two matters are further clarified.

In the interim period, I intend to strongly suggest to the President that he fulfill the requirements of Public Law 110-286 and immediately appoint a special envoy to address the entire range of issues regarding relations between the United States and Burma.