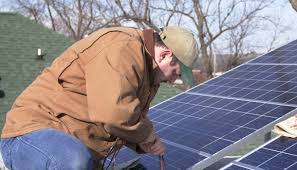 Based on Republican rhetoric to the contrary, you’d think that comprehensive, clean energy and climate legislation was some sort of Communist plot (even though the core of it, “cap and trade,”  was originally a conservative, Republican, market-oriented idea).  What’s a bit surprising, though, isn’t that Republicans like Eric Cantor are making up the facts – what else is new on that front? – but that they’re actually going against the wishes of one of their core constituencies – small business owners. Check out this polling information, and ask yourself the question, “what do Republicans have against small business owners?”

Small business owners in Virginia strongly believe the country needs to move toward clean energy and that new energy policies will transform the economy and help them create new jobs. They support comprehensive clean energy and climate legislation currently being discussed in the US Senate. Support for a climate and energy bill from Senators Jim Webb and Mark Warner would be a winner with small business owners back home. A Public Policy Polling survey of 711 small business owners across a three-state region including North Carolina, South Carolina, and Virginia, including 292 specifically in Virginia, between July 7th and 9th, found that:

* 54% of small business owners support the bill being debated in Washington right now, compared to only 43% who are opposed. That includes majority support across party lines, as Democrats support it, 78/20, and Republicans do so, 55/39. Businesses with annual revenues under $250,000 give an even higher level of support to the bill–55% say they favor it, and only 42% dissent.

* 62% of small business owners think that moving the country to clean energy is a smart way to restart the economy and help small businesses create jobs. That sentiment is shared by 85% of Democratic business owners and 62% of Republican ones. Owners of businesses with fewer than 10 employees are particularly optimistic that a shift in energy sources will help spur job creation.

* 58% of small business owners agree that adopting new energy policies will transform the economy and want their businesses to be part of the revitalization, compared with 37% who don’t.

* 57% of business owners think America should focus on maximizing the value of the energy we use and invest in clean energy, while just 26% think the country should keep subsidizing oil companies.

* Small business owner support for the bill will increase even further if it includes several tools to help them take advantage of new developments in clean energy. This includes interest-free loans to help them make energy efficiency upgrades, free energy audits to help them learn how to reduce usage and save money, and consultation on how they can profit from the emerging clean energy industry.