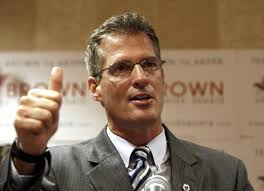 Sen. Scott Brown’s coming to campaign – actually, raise money – for Rep. Rob Wittman (R-1). The only problem is, if you check out Brown’s Facebook page, the “tea partiers” are extremely pissed at him for his announced decision to vote for financial reform legislation. Here’s a sampling, typos (e.g, “rhino” instead of “RINO,” “you’re” instead of “your”, etc., etc.) included.

*”You have lost my support.”

For what it’s worth, I strongly support Brown’s decision to back President Obama’s financial reform legislation. I strongly encourage him to also support comprehensive, clean energy and climate legislation. Thank you Scott Brown, and enjoy the 1st CD of Virginia!  Ha.