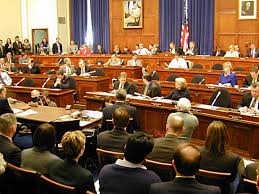 What, in real life, is the job of a Congress person?  This is not a trick question, or a joke. Sure, the Constitution placed the description of the Legislature up front, in Article I, thus indicating the Founding Fathers placed more importance on the legislature than on the executive, which came in second, or the Courts, which came in third: “Article I. Section 1. All legislative Powers herein granted shall be invested in a Congress of the United States, which shall consist of a Senate and House of Representatives” and immediately next, Section 2 sets up the House of Representatives, with representatives chosen individually by the electorate. Nowadays we hear candidates talking about “representing” their District, and opponents seeking to unseat a sitting Congressperson complaining that he or she “does not represent their District.” So, is that the job description? To “represent” the several thousand people residing in the District, and that’s it, no more, no less?

The bare bones of the admirably sparse words of the Constitution state the qualifications for being a member of the House of Representatives, and enumerates the powers of Congress, but just how a Representative (or, for that matter, a Senator) is to fulfill their job is left to the persons involved, and to those who elected them. Conscientious representatives poll their constituents on various topics, but seldom does a majority respond (and never does absolutely every voter respond).  Moreover, the questions are not always worded wisely, nor do the options offered always encompass every possible nuance of the topic, so a voter may not be given any choice that represents his sentiments exactly. Thus, most of the real decisions end up being made by the elected official who, in the heat of daily legislative business, weighs the fine print in this bill against the fine print in another bill, if he/she manages even to read them at all, and makes a lonely decision without truly “representing” his multitude of constituents in toto.

There is no way every voter in the District can understand, or have an informed opinion on, every matter addressed in the legislature.  Nor can every voter be privy to the minutiae of every committee hearing, or exactly how a piece of legislation must be drafted, nor the bargains that always must be made in producing the legislative sausage. Nor does every voter even want to do all that.  That is both the glory and the failure of representative democracy.

For such reasons as these, then, I believe that the job description of any elected official, and especially that of a Congressperson, is not simply to “represent” the district, but to educate his/her constituency on the significant matters before the legislature. This means doing more than telling everyone how much pork he/she delivered to the locality, and more than producing an authoritarian announcement of his vote, or even explaining his vote by attacking the other side. It means brining along the electorate in the process, making them partners in their government—– and without windy, boring dissection of the legalese in which bills are written.

A good example of this education function is how Congressman Tom Perriello of Virginia dealt with the recent Health Care reform bill in his town halls.  If more Congresspersons (and President Obama himself) had done the hard work of educating the voters as did Mr Perriello, it seems to me we would have had a much more pleasant August last summer, and, in the end, a lot better legislation.

It is also worth remembering that we elect, or should elect, people to public office as much for their qualities of judgment as for their stands on this particular issue or that. Today, who knows what new problem will suddenly arise, what black swan will swim by and utterly confound all carefully laid plans? Besides, given the complexity of even the simplest-sounding matter today, who among us has the time or talent to be an expert on every little thing, or, for that matter to understand the thousand pages of documentation, or unravel the hours of varied testimony in a committee hearing? That’s why we elect some one else to do all that (and why we have so many lobbyists scurrying around—- they have their place, too).

That is why the job description of a Congressperson should go beyond “representing” the District to including integrity and high qualities of judgment, judgments based not on the latest poll or focus group, but on a clear philosophy of government, and including educating the voters along the way.

That is also why I firmly believe that a Democrat should never “tack to the left in the primary and then tack to the right to win the general election.” This is a lot of hooey promulgated by expensive consultants trying to justify their fees. There really is a difference in the basic philosophy of a Democrat versus a Republican, a distinction these consultants blur or ignore in the mistaken notion that this is the way to win.  It is a real choice for governing under a clear vision of the social contract, with a more expanded view of economic theory than simple Free Marketeering, having a longer vision of the future than short-term profit, and running a system that is more beneficial for more people  than just the wealthy elite. In other words, from the beginning to the end, there must be a clearly articulated choice offered to the electorate, and that choice must be followed through with integrity once elected. The elected official must apply that chosen philosophy to the best of his/her judgment to whatever issue may later arise, for the good of the whole.

As Edmund Burke famously wrote to his constituents  in Bristol:

“Certainly, gentlemen, it ought to be the happiness and glory of a representative to live in the strictest union, the closest correspondence, and the most unreserved communication with his constituents.  Their wishes ought to have great weight with him….. and above all, ever, and in all cases, to prefer their interest to his own…. Your representative owes you not his industry only, but his judgment; and he betrays, instead of serving you, if he sacrifices it to your opinion…. government and legislation are matters of reason and judgment, and not of inclination; and what sort of reason is that, in which the determination precedes the discussion…. To deliver an opinion, is the right of all men; that of constituents is a weighty and respectable opinion… which a representative… ought always most seriously to consider. But authoritative instructions; mandates issued, which the member is bound blindly and implicitly to obey, to vote, and to argue for, though contrary to the clearest conviction of his judgment and conscience—- these are things utterly unknown to the laws of this land, and which arise from a fundamental mistake of the whole order and tenor of our constitution.