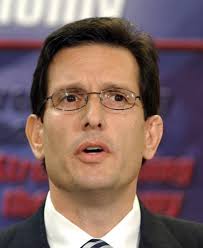 Sick of all the negativity?  Me too.  (Heck, I am even sick of my own negativity!) I refer specifically to the presumption by most talking heads, and even many pols, that Dems will lose big in November.  It is “preordained,” they imply.  You know, preordained because of 1994.  I say, “Not!”

For one thing, despite my pessimistic diary on framing recently, Dems are finally getting their message out more effectively.  In today’s release of the WAPO poll, Repubs score even lower than Dems with the public.  Additionally, the GOP shoots itself in the foot more very single day that the Trio of Nothing (Boehner, Cantor and McConnell) clowns its way through life and their supposed representation of real people, not corporations.  Another illustration of why we will win is that Eric-the-Clown Cantor grasped at straws, or rather Robert Gibbs’ gloom and doom about Dems prospects in November on NBC the other day.  And then about a day later, he slammed the Job Recovery Act –at an event featuring businesses funded with millions in stimulus dollars.  The hypocrisy over-floweth.

Most of all, we will win because national Republican pols are lying hypocrites, who purport to  care about the economy, put on their deficit hawk scare costumes, and then call for tax cuts (reducing the revenue stream). Talk about phony.  But they think that no help should be on the way for those suffering because of Wall Street and Republican Congressional (and former presidential) neglect.   Just today, another member of Congress accused the unemployed of “just sitting there.”  It never stops.

Still don’t believe me?  Huffington Post quotes some MSNBC talking heads about what a stretch the hype about a Republican big win really is here.


•  1) Unlike in ’94, the Republican Party has a [favorable/unfavorable] score that’s no better (and sometimes even worse) than the Dem Party’s.

•  2) Unlike in ’94, the GOP isn’t necessarily running on new ideas or even with many new faces.

•  3) The National Republican Congressional Committee has a HUGE financial disadvantage compared with the Democratic Congressional Campaign Committee, and the RNC’s political/fundraising troubles won’t be able to make up the difference

•  4) Winning 39 seats is a tall order. After all, when Democrats won back the House in 2006 — during the height of violence in Iraq and after Hurricane Katrina — they picked up 30 House seats. The GOP will need almost 10 more than that.

Nor do most analysts expect the Senate to turn.  Ironically, now that I’ve talked about the horse race, I will add this.  The thing I hate most about political coverage (besides its glaring corporate slant), is incessant coverage of the horse race, which swamps fact-checking, issue delineation, and illustrated real differences (which do exist), even on those thing Dems tack “right” (wrong-wing) on.  There’s little sign it will get any better.  Indeed with the fact- and ethically-challenged FAUX News (along with some CNN FAUX wannabes, it’s hard to see the light at the end of the tunnel for sound news coverage.  It’s downright surreal that only MSNBC (owned, at least until or unless Comcast gets its buyout approved, by powerful defense contractor GE) provides any semblance of balance.  Of course, then some of the false umbrage patrol will feign that Keith Olbermann or Rachel Maddow are “as bad” on the left as are Glenn Beck, Sean Hannity and Bill O-Lielly are on the far wrong-wing.   Again, I say, “Not!”

So, Dems should be wary of the horse race gloom and doom.  Finally, if Gibbs is trying to motivate the “troops,” he’s picked a poor way to do it.  A little optimism, tempered with a realistic delineation of what it will take to win, please.  Gloom and doom are no way to fire up the faithful, or inspire moderate Republicans and independents thinking about crossing over.

Virginia Must Perform a Water Quality Review on MVP’s FERC Proposal Another Chance to Ensure Protection of State Waters https://bluevirginia.us/2021/05/virginia-must-perform-a-water-quality-review-on-mvps-ferc-proposal-another-chance-to-ensure-protection-of-state-waters