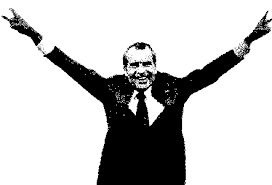 The Southern Strategy of Dick Nixon lives.  And today’s Republican Party “is very much a Southern regional white party in terms of the demographics of its supporters,” says Huffington Post.

Huffington Post summarizes the upshot of a very interesting new WSJ poll.  (For obvious reasons, I won’t link a Murdoch property here, however.) HuffPost says that the role of the GOP as a (white) Southern Strategy party lives.  But the strategy may not be buying the GOP much.

This bodes far better for Dems than the so-called MSM would have you believe.  One might also ask:

How’s that workin’ for the GOP?  Not so well.  As the story notes, even Michael Steele says that African Americans have no reason to vote for the GOP.

Additionally, Harry Reid may be right, Hispanics may not have a reason to vote for Republicans either.  Nor do other people of color, women, the elderly or college students. Nor would the poor be well represented by the GOP. The list for whom a vote for the GOP would be a mistake also includes those who’ve been downsized, those who lost their jobs due to the mortgage crisis or bad economy, and those whose unemployment benefits are running out. So, their nay-saying; fib-telling; fear-mongering; Obama, immigrant and worker/voter trashing isn’t such good “strategery.”

Seems like a smart decision by former Rep. Riggleman (R-VA05) not to run for governor of Virginia this election, as he'd have basically zero path to victory. https://bluevirginia.us/2021/05/thursday-news-biden-is-reaching-out-to-republicans-but-his-real-target-is-joe-manchin-liz-cheneys-downfall-shows-the-gop-threat-to-democracy-is-getting-worse-how-long-can-trump#comment-5382601046 h/t @aaronlarnavarro