On Monday, the Republican Arlington Sun Gazette praised Virginia House of Delegates Speaker Bill Howell (R) and Sen. Chuck Colgan (D) for having “rightly ripped into the Arlington board for bringing race into the lawsuit, and said that Arlington’s ongoing obstructionism is hurting Virginia’s reputation and its ability to bring new jobs to the commonwealth.” According to the right-wing real estate rag Sun Gazette, Arlington’s lawsuit against HOT lanes on I-395/95 “is seen by just about everybody – with the exception of the County Board, county attorney and the D.C. lawyers making huge money on it – as an embarrassment to Arlington and those who govern it, further alienating the county from potential regional allies and state leaders of both political parties.”

Needless to say, Arlington County Board Chairman Jay Fisette begs to differ. To view his letter to Speaker Howell and Sen. Colgan, see after the “fold.” Among Fisette’s concerns are “the degradation of transit and HOV…the capability to move people, not simply vehicles, as well as the negative secondary effects on local roads and air quality resulting from poor transportation planning and design.” Other than that, it’s a great idea! Heh. 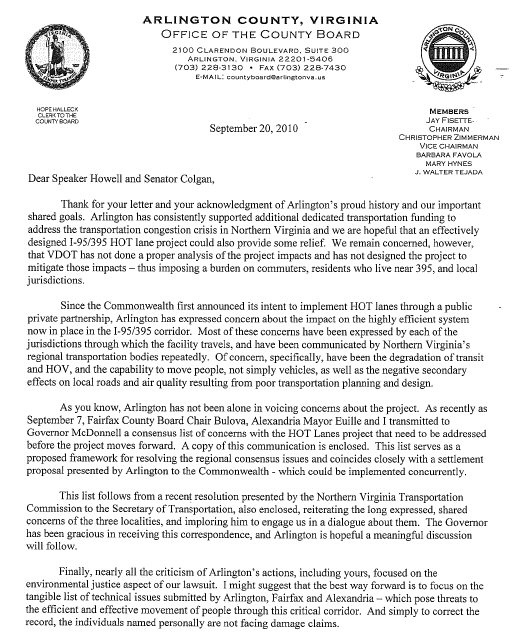