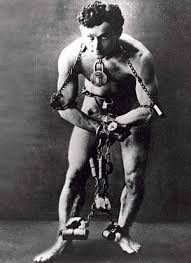 By refusing to pro-actively push for a referendum, Democrats think they are being smart, confident they can kill the Governor’s ABC plan in the State Senate, and embarrass him. They see McDonnell in a straitjacket, hanging high above the General Assembly building, seemingly with no way out, and all of it rebounding to the Democrats sure benefit and his sure loss.

Harry Houdini promised to come back from the dead but never has. Until now perhaps?

As Houdini, aka Erik Ivan Weisz, showed escaping from a straitjacket is actually rather easy. Legend says the idea for his legendary upside-down escape before a huge crowd of people as caught by the newsreels came from the “Great Randini” the stage name of a young guy who was a fan of Houdini and who showed him the possibilities in the attic of his mother’s home in Sheffield, England. As to the strait jacket itself, it first came to Houdini’s attention while visiting a Canadian Institution where he first watched it being used on a patient.

Turns out it isn’t all that hard for a sane person, even a Republican, to get out a strait jacket, especially one put together by Democrats.

IS HOUDINI GOING TO FINALLY COME BACK AS BOB MCDONNELL, ABC escape artist 2010?

Senate Democrats and Democratic Party leaders laugh at the possibility. They think they have McDonnell in dire straits. Really?

1)  McDonnell’s Reform Commission comes up with a number of modest reforms, and of course the marque issue, the McDonnell privatization plan. The Governor says thanks Mr. Malek and Company.

2) The Governor calls a Special Session, sending down bills to enact all of the reforms, big, medium and small.

3) Let’s assume worst case, his own GOP kills the ABC plan in the House, but passes along the others, small potatoes yes, but President Clinton showed how little things can mean a lot to your approval rating.

4) Senate Democrats will crow, yes it will be an embarrassment inside Capitol Square lobbying community to McDonnell, heck let’s even say they don’t give it to a study commission, just killed it outright.

5) Senate Democrats however have to pass these small things, what is the excuse not to?

Net, net: McDonnell gets headlines saying the GA passed X number of his reforms, saving Y dollars, but he got defeated on his big ABC thing.

Result: He is winner, not the Democrats. AND THIS IS ASSUMING THE WORST CASE SCENARIO. If the House puts it in a study committee instead of killing it, then McDonnell wins on his small things and can say that he agrees we can study it a little longer, we know have a new $1 billion in tranny money so no need to hurry right now if waiting a little bit will help get the GA on board.

The headlines will say: General Assembly passes most of Governor’s reforms but kills his big one.

In today’s political climate, getting bipartisan support for anything is a win, getting it for reforms that can be billed as saving millions and shrinking government is a home run.

BOTTOM LINE: If Democrats don’t watch it, they are the ones going to be in the straitjacket, politically speaking.

McDonnell has blundered hugely in his nearly year long pursuit of the white whale.

A referendum campaign would do not just the right thing by the people, but force him and the GOP to defend any number of things, giving Democrats a chance they have not had in recent memory to engage Virginians in a real debate on the broader issues which go into ABC privatization.

Come 2013, Democrats may regret letting McDonnell, Bolling and Cuccinelli snatch victory from the jaws of defeat without even putting up a fight.