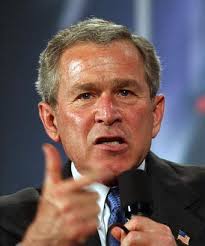 Apparently, George W. Bush thinks he hasn’t done enough damage.  Now he surfaces to say that he thinks his worst failure is not privatizing Social Security.  I’d  call that one of the Democrats’ bigger success stories.  It’s all in the perspective.  THE GOP is on the wrong side of public opinion and the wrong side of history.

Americans do not want to lose their Social Security checks.  Young Americans want to believe it will be there for them.  With the current thinly-disguised GOP plan, it won’t be.  Thank you, George for proving our point. Today, a number of GOP candidates (Sharon Angle included)have scrubbed their websites and their language to deceive Americans about their intentions.  As many of you know, Angle first talked about eliminating Social Security, but now claims otherwise.

These 2010 GOP candidates aim to turn Bush’ failure into a nightmare for the rest of America.  Americans of all ages will one day need their Social Secuity checks.  But gaming the system, de-funding the Social Security Trust Fund while handing the same monies over to Wall Street will only serve to force the collapse of the Social Security System.  The monies will also end up in wealthy executives’ bonus checks.  Bush and the GOP know this.  They hope that we don’t.

Young or old, if you care about your future economic security, trust (most) Dems to protect both your private pensions and your Social Security.  Don’t look the the GOP to protect your economic health.  If it were not for the Pension Security Act which The Clinton administration enforced, my own father would have been hurt when the corporation taking over his former company wanted to stiff retirees of their pension checks. The Democratic administration made sure that did not happen.  Thank you, Bill Clinton.  (When it came to Social Security, Bill Clinton flirted with and was on the brink of a privatization scheme of his own, though.)  Since then, most Dems have learned.  But Republicans never learn.

President Obama has said as recently as this past week, he will NOT allow the GOP to privatize Social Security.  Here in the 9th congressman Rick Boucher has vowed to protect Social Security from privatization schemes, unfair reductions, or elimination.  Let’s make sure the rest of Virginia’s Congressional delegation gets it, that voters will not put up with the theft of what’s left of most Americans’ economic security.

It has been a rough time in America.  Through neglect and abuse of citizens, the GOP wrecked the economy in 2007-8.  Now it wants to have at us in a devastating way for most Americans.  Making things tougher should be considered out of the question.  But like so many maggots, the Milton Friedmanites keep at it. So, no, we are not staying home November 2nd.