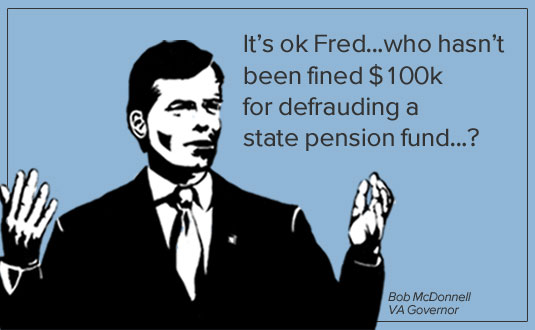 It is common practice for government officials, when they have something they want to hide, to release it on Friday afternoon when nobody’s paying attention. In that way, they essentially hope to “sneak one by” the media, and therefor the public, whether because the news is bad, or more insidiously because there’s stuff they really don’t want people to focus on.

A case in point: this past Friday, the corrupt, Nixon Jew counter and dog barbecuer Fred Malek government “reform” commission released an “interim report”. The report contained “107 recommendations and observation,” many of which appear harmless (e.g, “state government should be more convenient, transparent and taxpayer friendly” – duh!) and/or eye glazing (e.g., “all government financial statements and budgets  must be accompanied by a full statement of debts, liabilities, and guarantees, including the differ ng maturities of that debt and its servicing cost”). However, there also were several items that jumped out at me as troubling, as well as several serious omissions.

First, the omissions.  Del. Albert Pollard (D-99th) told me that he was “disappointed that there were not recommendations on reforming Department of Correctional Enterprises, moving VDOT off of engineering standards for smaller projects, adopting a one year budget and reforming Department of General Services.”  In fact, Del. Pollard notes, “if I read the report correctly, an agency will still have to get an engineering study to put in a flag pole.”  I’m sure there are many other omissions as well. I’m waiting for comment from other lawmakers, other than Del. Pollard; curiously, the cat seems to have gotten all of their tongues on this one. Odd.

(lots more failure after the “fold”)

Anyway, on to the outright, not to mention completely predictable, failures of the corrupt Jew counter Malek commission. First off, even Malek himself only claims savings of $100 million – apparently total, not annual – from his commission’s recommendations. That’s $100 million total out of a Commonwealth biennial budget of about $75 billion. To put it another way, that’s about one-thousandth of the biennial budget that this great “reform” commission has come up with in “savings,” ostensibly leaving the other 999-thousandths of government spending intact. Wow, that’s quite an accomplishment there by our intrepid crusader against “government waste”, Bob McDonnell!

But wait, it gets even less impressive. That supposed $100 million in savings (no details or evidence offered, of course – just take them at their words on that one!) needs to offset the losses from McDonnell’s biggest boondoggle, his DOA ABC privatization proposal. If the latter were ever passed, and thank goodness it probably won’t be, it would put Virginia about $47 million a year into the hole every year. That’s $94 million lost from the biennial budget, so even if you assume that the $100 million “savings” Malek and McDonnell claim are biennial – and there’s absolutely no evidence to back that up – it barely covers the revenue lost from the liquor plan.

Other than that, what does this supposed “reform” commission offer us?  Basically, that state government employees should work 4 days a week, 10 hours a day. Wow, that will accomplish a lot. Oh, and they also managed to sneak in some stealth anti-government crap in there, like item #97 (buried deep in the report), which calls for “set[ting] t a statutory limit on government spending expressed as a percentage of Gross State Product (GSP) ora similar benchmark.” Also, item #97 (buried deep in the report as well), which calls for “reduc[ing] all budget baselines by 2% as a compulsory productivity dividend each financial year.”

Yes, this thing’s a joke. A bad one, on the people of Virginia. No wonder why they released it on a Friday afternoon when nobody was paying attention. Heckuva job, Bob (and Fred)!