Over at TBD.com/weather, John Metcalfe takes a look at the University of Arizona’s new interactive model of sea level rise. What would current estimates of 2 meters of sea level rise by 2100 mean for the DC area?

The Jefferson Memorial will not just be by the water, it may be underwater. The northeast part of Roosevelt Island will gain more marshland, as well as the bit of Rock Creek where it meets the Potomac, which should please the old-timers who hunt catfish there. It’s hard to see the upside of Bolling Air Force Base becoming submerged, but the military has solid engineers – can’t they build a bigger sea wall? And Old Navy’s name will finally make a little sense as the creeping water moves inland over the Potomac Yard Shopping Center. I’m sure the chain’s marketing whizzes can figure out something about shopping with gondolas.

If those were the worst effects of runaway global warming, that would be expensive to deal with, but not necessarily devastating. However, scientific modeling has seriously UNDERestimated sea level rise to this point — seas are rising faster than scientists have predicted & so far they’re not sure why.

And just a few minutes of tinkering with the University of Arizona’s model reveals just how much is at stake for the DC area if scientists have even slightly lowballed sea level rise.

What if it’s 3 meters instead of 2? Bye bye, National Airport & Tidal Basin: 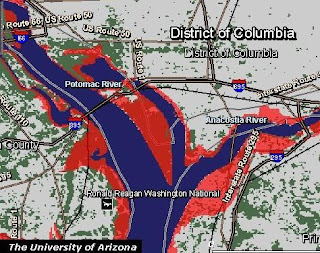 And what if scientists are dramatically underestimating sea level rise? There’s a reason this model includes 6 meters of sea level rise by 2100 — while it’s unlikely, it’s possible. And what would that mean? Might be time to relocate the nation’s capital to higher ground: 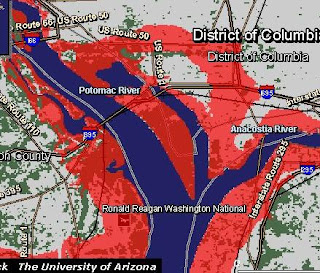 The takeaway of all this — especially for places like Hampton Roads where smaller degrees of sea level rise would be much more devastating — is that so far, America is rolling the dice with the above scenarios. Congress has done nothing to address global warming, leaving our fate — be it 2 meters, 3 meters or 6 meters  of sea level rise — to chance.

Wouldn’t it be better to gradually reduce our carbon pollution now & reduce our chances of a worst-case scenario? Isn’t that the conservative thing to do? And the same solutions that protect our climate can also cut energy bills, strengthen our national security, and create millions of jobs.

Or hey, we could follow Jim Webb’s lead & do nothing. Maybe there are big untapped economic opportunities I’m missing. Scuba diving expeditions through the underwater remains of Old Town Alexandria?