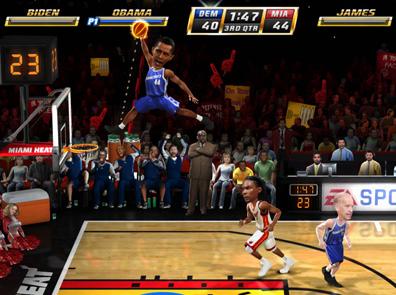 The Green Miles has used part of his holiday vacation to get better acquainted with NBA Jam for Wii. Two of the unlockable hidden teams in the game are the Democrats & the Republicans. The Democrats feature Barack Obama, Joe Biden, Al Gore, and Bill & Hillary Clinton. The Republicans include George W. Bush, Dick Cheney, John McCain & Sarah Palin.

NBA Jam’s player ratings often don’t make a lot of sense (John Wall of the Wizards is one of the fastest players in basketball yet isn’t exceptionally fast in the game), and the political teams are no different. For instance, Bill Clinton is a better dunker than Barack Obama.

But hey, you don’t play a game like NBA Jam for its realism. It’s incredibly entertaining & for a political junkie like me, the Dem & GOP teams dial up the fun even further. John McCain drove in for a layup & as Joe Biden jumped for the block, I found myself yelling, “Don’t bring that weak stuff up in my house, John McCain!” Kinda cathartic after McCain’s legendarily soft showing on Don’t Ask Don’t Tell repeal.

As I went up for a dunk with Biden, the announcer asked, “Can he finish?” To which I replied as Biden threw down, “You even have to ask if Joe Biden finish? PLEASE.” And it’s always annoying when the computer starts a comeback by raining 3s – but it’s exponentially more grating when the shooter is Sarah Palin.

One set of ratings may be a subtle political statement: All of the Republicans are really good at stealing.